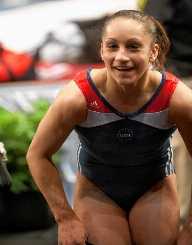 Early in the 19-century US and educationalists introduced Swedish and German gymnastics training programs. It gained a huge reputation in both military and national field that it came to be known as a disciplinary exercise. This is what a Michigan native, Jordyn Wieber got interested in. Right from her childhood life, she loved everything to do with acrobatic skills. Not to mention a gymnast must have body balance, coordination, strength and most of the agility. All these skills should be combined artistically. There is no doubt that Jordyn followed each lesson to the latter. To date, she is a renowned Olympic gymnast who garnered several awards for her team. She became the first Michigan girl to join the U.S Olympic Women’s Gymnastics team.

Jordyn Wieber is still in her teenage years, but she has surpassed everything that comes her way. She is typically defined by her cheerful nature as well as an empathetic pose. Another great thing is that her sense of intuition always drives her to the right path. She finds it quite easy to configure exactly what her friends and loved ones are feeling and thinking. At the same time, her family and friends are all excited about this ability, but it’s something that she possesses naturally. Her positive attitude towards life gives her a chance to see the best in every scenario and situation. This is one of her persona that is also applauded by those around her. The most original thing about her is that she likes to discover new things in life. As a result, she gives herself a chance to aim for the highest. Vision and aspirations are her right morals. In other words, Jordyn is a creative and tenacious damsel, and she is always proud of who she has become.

On July 12, 1995, Jordyn Marie Wieber was born in Dewitt, Michigan, the United States to David and Rita Wieber. At the age of three, her parents took her to a nearby gymnastics tutor. She was placed on several programs, and after two years Jordyn started intense training. At the age of seven, she was selected to join the 2002 National Top 7-8-year-old Diamond Team. At the age of 8, she participated at the Early State Championships where she garnered bars, vault, beam and all-around.

Early in 2004, Jordyn joined Michigan State Championship where she completed with an all-around position. Before celebrating her tenth birthday, she was certified to play for level ten which is regarded as the highest level. The following year, she garnered her certificate where she went to participate at the international elite level.

In the mid of 2011 Wieber’s performance led him to fame. Jordyn Wieber joined American Cup where she played against an artist gymnast, Aliya Mustafina. She became famous for defeating a 2012 world champion holder. After several months, she received a gold medal in Tokyo, Japan. She followed it up with a bronze medal for winning on a balance beam. In the process, she garnered a gold medal for the U.S Olympic women’s gymnastics.

In 2012 Jordyn proved her fame once more by winning her 3rd American Cup all-around contest. She also participated in the Pacific Rim Gymnastics Championship. In the process, she helped the American team to win an all-around competition. In June 2012 Jordyn competed at the Visa Championship where he completed with an all-around position. For her tremendous performance, she went to California where she showcases her skills at the Olympic Trials. It was here that she was selected to compete for the U.S in the Summer Olympics.

In 2012 Summer Olympics Jordyn made her stance at the American women’s gymnastics. Although some of her teammates won their medals, she didn’t miss a chance to hold a gold medal. She became the seventh-rated gymnast to have won the gold medal since 1996.

Rose To Stardom And Retirement

From 2011 henceforth Wieber, turned into a gymnastic star. It was here that she was chosen to play for AT&T as well as Kellogg’s. In the process, she has received several awards including a Sullivan Award. In spite of her tremendous success, Wieber is a down to earth damsel. She has always remained true to her personality despite her presence on The Ellen DeGeneres Show in 2012. Her sufficient concentration is what makes her achieve the unachievable. In the mid of 2015, Jordyn Wieber announced her retirement. It was here that she changed her current routine to being a student and helping her friends with their gymnastic lessons.