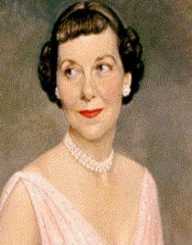 Marmie Carlson Eisenhower was born on the 14 November 1896 in Boone, Iowa to John Sheldon Doud, a meatpacker, and his wife, Elvira Carlson. She was the second of four children born to the couple and had three sisters. The family moved from Boone to Cedar Rapids, Iowa when Marmie Eisenhower was an infant and in 1902, relocated to Colorado and in 1905 settled in Denver. They also kept a second home in San Antonia, Texas where they spent the winter months. Her father by then was a successful businessman, and the family lived comfortably.

When Marmie Eisenhower was 19 years old, she met Dwight David Eisenhower (1890-1869) who was a West Point graduate and a lieutenant in the US Army. They met when her family was spending the winter months in San Antonio, Texas and her future husband was stationed at Fort Sam Houston. The couple married, and they lived in officers barracks. Due to her husband’s career as a military officer, the family moved frequently.

First Lady of the United States

Marmie Eisenhower's husband was the Supreme Allied Commander of the European from during World War II who oversaw the D-Day Invasion. As a five-star general, he led the final assault on Germany and also accepted the German surrender on the 7 May 1945. During the war years, Marmie Eisenhower lived at the Wardman Park Hotel in Washington D.C. She spent time volunteering. Her correspondence with her husband during this time was later published.

When the war was over, Dwight Eisenhower was appointed the President of Columbia University, and the family lived in New York City. He was then appointed Commander of NATO during which time with resided in Paris, France. Her husband ran for president of the United States in 1952 and from the 20 January 1953 until 20 January 1961, Marmie Eisenhower served as the First Lady of the United States.

When Marmie Eisenhower was 19 years old, she met Dwight David Eisenhower (1890-1869) who was a West Point graduate and a lieutenant in the US Army. They had two sons: Doud Dwight (1917-1921) and John Sheldon Doug (1922). John went on to become the US ambassador to Belgium and was a military historian and decorated shoulder. Their grandson, David, married Julie Nixon, daughter of Richard Nixon. The Eisenhower retired to their Gettysburg. Her husband died in April 1969. Marmie Eisenhower died on the 1 November 1979; she was 82 years old.