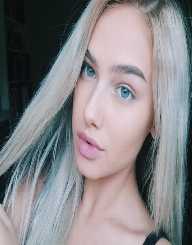 Molly O'Malia is a social media personality from the United States. She aspires to sing and model with a strong following on Instagram.

Molly O'Malia was born on May 22, 2001, in Wilmington, Delaware. Her mother is Anne Lowry O'Malia. Her parents separated in 2011. Later that year, her sister Christina endured a severe brain injury from a car accident.

Molly O'Malia has been posting photos of herself and music videos on Instagram. In September 2016, she posted a YouTube video of her singing a cover of “Riptide” from Vance Joy.

O'Malia and Rendall Coleby, another social media celebrity, are co-owners of the group “Dreamy Team.”

Molly O'Malia promoted a Student of the Year Delaware fund-raising page on her Instagram account. She advocated for the Leukemia and Lymphoma Society.

In late 2015, Molly O'Malia gained more attention because of rapper Tyga. At the age of fourteen, she stated in a press conference that she did have a conversation with him. She said she thought it was about her music career. However, she started to feel uncomfortable.

At that point, she stopped communicating with him. Sources believe that Tyga thought Molly O'Malia was 17 or 18 years old at the time and that she was flirting with him. The controversy gained momentum as Tyga's girlfriend at the time was Kylie Jenner. Her fans had a lot to say about the issue.

Molly O'Malia deactivated her Twitter account and put her Instagram account in private. Controversy continued when rapper Bobo Norco said that he was messaging with her and that Molly O'Malia said she was 18 years old.