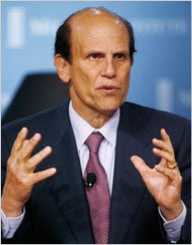 Michael Robert Milken was born on July 4, 1946, in Encino, California. He attended the Birmingham High School and was the head cheerleader in the school. After high school, he went to study at the University of California, Berkeley and graduated in 1968, with a B.S. with honors. After this, he received MBA from Wharton School of the University of Pennsylvania.

In 1969, Milken landed a job at the Drexel Harriman Ripley investment bank. He completed his MBA and joined the company as a director of low-grade bond research, and was given capital and permitted trade. In 1973, Drexel merged with Burnham and Company, and Milken became the merged firm’s head of convertibles. He persuaded his boss to allow him to start a high-yield bond trading department, which soon earned 100% on investment. By 1976, his earnings at the firm reached $5 million in a year. In 1978, he moved the bond operation to Century City in Los Angeles.

In the mid-1980s, Milken’s high-yield bond buyers reached a size, which allowed them to raise large amounts of money very quickly. This facilitated the activities of a leveraged buyout of firms like Kohlberg Kravis Roberts. Milken earned the status of a high-yield pioneer on the Wall Street. In 1996, he and his brother Lowell founded the Knowledge Universe and the Knowledge Learning Corporation, which was a part of KinderCare Learning Centers. Milken is the chairman of the company. He also established K12 Inc, an education management organization that provides online schooling.

In 1979, Dan Stone, who was a former executive at Drexel, revealed in his book that Milken was under constant scrutiny from the Securities and Exchange Commissions from 1979. He was being investigated due to unethical and sometimes illegal behavior in his department. Milken condoned these allegations and called upon Drexel’s president Fred Joseph, who was known for his strict views on the security laws.

Milken continued to be under investigation until 1986 when the process moved to the next phase. An arbitrageur Ivan Boesky pleaded guilty to securities fraud as a part of a larger insider trading investigation. Boesky implicated Milken in several illegal transactions, like insider trading, stock manipulation, and fraud. After this, an SEC probe was set on Drexel, and the investigation mainly focused on Milken’s department. The company also launched an internal investigation, but Milken refused to talk to the investigators, only through lawyers.

Drexel continued to insist that there were no legal issues for two years. The lead investigator Giuliani began considering an indictment on Drexel under the Racketeer Influenced and Corrupt Organizations Act in 1988. Upon hearing about this, Drexel management began to talk about plea bargains. The talks collapsed in December when Giuliani made several demands that Drexel found too harsh. However, very soon the firm’s lawyers discovered suspicious activity on one of Milken’s setups, which allowed members of his department to make their investments. Finally, the investigation found that there appeared to be self-dealing in Milken’s deals. In 1988, Drexel entered a guilty plea to six counts of stock parking and stock manipulation, and as a part of the deal, Milken had to leave the firm.

The following year, the federal grand jury indicted Milken on 98 counts of racketeering and fraud. In 1990, Milken pleaded guilty to six counts of securities and tax violations. Milken agreed to pay $200 million in fines and to settle with the SEC and pay $400 million to the investors that were affected by his actions. He also accepted the lifetime ban from involvement in the securities industry. At the time he was also involved in a related civil lawsuit against Drexel and agreed to pay $500 million to Drexel’s investors. Milken was also sentenced to three years in prison, but he served 22 of them.

Milken and his brother Lowell are founders of the Milken Family Foundation, which supports medical research and education. The foundation was founded in 1982, and three years later, the Milken Educator Awards were also founded. The fund has awarded more than $60 million to more than 2,500 teachers.

After being released from prison, Milken founded the Prostate Cancer Foundation for prostate cancer research, which in 2010 became the largest source of funds for the cause. Milken was diagnosed with prostate cancer in advanced stage upon release from prison, but it is currently in remission. Milken was called The Man Who Changed Medicine by Fortune magazine. In 2012, he and Dr. Francis Collins hosted 1,000 medical scientists, activists, patients and members of Congress for a conference to demonstrate the return on investment from medical research. In 2014, George Washington University renamed its public health school after Milken.