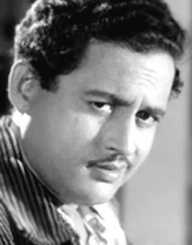 Guru Dutt has made a name for himself in the Hindu cinema. He directed some of the great films including Pyaasa and Kaagaz Ke Phool.

Guru Dutt was born on July 9, 1925, in Bangalore, India. His name at birth was Vasanth Kumar Shivashankar Padukone. His father Shivashanker Rao Padukone was a headmaster and later a bank employee.

His mother stayed at home with the family, but she also tutored and wrote short stories. Guru Dutt grew up influenced by the Bengali culture in his Bhowanipore neighborhood near Calcutta. Guru Dutt had his struggles in his childhood with the strained relationship between his parents as well as his mother's side of the family.

Guru Dutt attended school in Calcutta. In 1941, he was trained under dance maestro Uday Shankar at the Uday Shankar India Culture Center. He was a member of that performing arts troupe.

Guru Dutt's first job was as a telephone operator in Calcutta. That job did not last long, and he moved to Mumbai in 1944. Guru Dutt returned to his performing background and had a three-year contract with Prabhat Film Company in Pune. Guru Dutt had numerous roles in the films during that time. In 1945, Guru Dutt was an actor, assistant director, and choreographer for the film Lakharani.

Guru Dutt was also in charge of dance composition as well as an actor in Hum Ek Hain in 1946. When his contract ended, Guru Dutt had small jobs or unemployment. Actor and producer Dev Anand wanted Guru Dutt to direct the movie Baazi in 1951. It was the first of many films that he directed on his own, and it was an instant success. Guru Dutt is also credited for writing the story. Guru Dutt also wrote the next films that he directed, Jaal and Baaz. They were not as successful as Baazi, but his next film Aar Paar was. Guru Dutt continued to be successful in directing films in the 1950s including Mr. and Mrs. 55, Sailaab, Pyaasa, and C.I.D. with Waheeda Rehman. Guru Dutt was also acting in films like Mr. and Mrs. 55 and Pyaasa.

In 1959, Guru Dutt acted in, produced, and directed Kaagaz Ke Phool. It is a semi-autobiographical story, but it was nowhere near the commercial success as his other masterpieces. The film lost millions in revenue, and Guru Dutt was discouraged from ever directing again. Guru Dutt did, however, return to the director's chair filming movies such as Full Moon and the award-winning Sahib Bibi Aur Ghulam.

Guru Dutt was a perfectionist in filming. Guru Dutt would scrap projects if he were not satisfied. Even though Guru Dutt made less than 50 movies in his lifetime, some of them are incomplete. Some of Guru Dutt's work in the last decade of his life came from other producers. Such films included 12 O' Clock, Bharosa, Bahurani, Suhagan, and Sanjh Aur Savera.

Guru Dutt married world music singer Geeta Dutt in 1953. The couple had three children. Their relationship was strained due to his work schedule and his extramarital relationship with actress Waheeda Rehman. One of the ways Guru Dutt coped with the stress of his life was through heavy drinking.

Guru Dutt died on October 10, 1964, in Bombay, India at the age of 39. His death was ruled a suicide by overdose of alcohol and sleeping pills. The legacy that Dutt left is one of contemporary style in his time as a director. Guru Dutt was the first to use close-up shots with 100mm lens cameras. In the Indian cinema, this filming is referred to as the “Guru Dutt Shot.”

Though he died in the mid-1960s, his movies gained more interest in the following decades with more of a cult following. When it comes to Indian cinema, he is considered to be one of the greatest filmmakers in the golden age of Bollywood.

It is not certain whether Dutt's untimely death was an accidental overdose or an intended suicide. Dutt had attempted to take his life three times before.