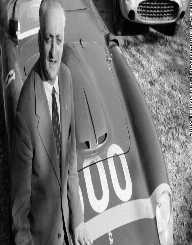 Enzo Anselmo Ferrari was born on February 18, 1898, in Modena, Italy to Alfredo and Adalgisa Ferrari. A son of a grocer from Carpi, Alfredo Ferrari had a metal parts fabrication workshop at his family home. Enzo Ferrari was the second child of his parents. He was raised in the small town of Modena with little formal education.

Enzo Ferrari was privileged to get the opportunity of watching a motor car race in Bologna accompanying his father at the age of 10, where Felice Nazzaro won at the 1908 Circuit di Bologna. He developed a passion for car racing after watching the event and decided to pursue the career of a racing car driver in due course. He served the 3rd Mountain Artillery Regiment of the Italian Army during World War I. In the 1918 Flu pandemic of Italy, Enzo Ferrari became severely sick and was discharged from the Italian Army as a result. Before that, his father and elder brother died during a severe outbreak of Flu in 1916.

To pursue his dream career of becoming a racing car driver, Enzo Ferrari applied for a job with Fiat in 1918 upon getting a letter of recommendation from the military authorities. However, the application was rejected on ‘No Vacancy’ ground. A car manufacturer in Milan, Italy, which changed used truck bodies into passenger cars, offered him the job of a test driver for their company C.M.N. (Costruzioni Meccaniche Nazionali). He was promoted to the position of racing car driver soon afterwards.

In 1919, Enzo Ferrari made his competitive debut as a race car driver when he participated in the 1919 Parma-Poggio di Berceto hill climb race. He finished fourth in the three-litre category at the wheel of a 2.3-litre 4-cylinder C.M.N. 15/20. He took part in his second race on November 23 of the same year. It was the Targa Florio race, and he had to abandon the race due to a leaking fuel tank prematurely.

In 1920, Enzo Ferrari left C.M.N and joined Alfa Romeo as a driver in their racing division. He came at the second position in the 1920 Targa Florio car race, where he drove an Alfa Romeo. This win was the beginning of his 20-year-long association with Alfa Romeo, where he began as a test driver and ended up becoming the head of the Alfa-Corse team. During 1921, he took part in many car racing competitions as an exclusive driver of Alfa Romeo and also met with his first accident when he staggered off the road to save a herd of cows crossing the route in the Brescia Grand Prix.

In 1924, Enzo Ferrari won the Coppa Acerbo at Pescara, prompting the Alfa Romeo authority to give him more opportunities to race in the prestigious competitions. He also won the Circuito Del Savio in 1923 and met the parents of World War I flying ace Francesco Baracca on this occasion. Count Baracca, Francesco Baracca, and Countess Baracca presented a photo with dedication and encouraged Ferrari to use the “Prancing Horse” emblem on his racing cars, which once decorated their son's plane for good luck.

During Benito Mussolini's totalitarian fascist regime from 1922 onwards, the name of Ferrari was used extensively in many Italian propaganda tools. He was awarded the Cavaliere dell'ordine della Corona d' Italia and was promoted to the rank of Commendatore. However, overburdened with expectations and stressed to the limit, Ferrari encountered an emotional breakdown and stopped racing.

In 1929, Enzo Ferrari founded Scuderia Ferrari, the official racing division for Alfa Romeo. He made similar deals with Bosch, Pirelli, and Shell. His team of around 50 full and part-time drivers and technical assistants, the largest group ever formed by one man, went on to win eight races out of 22, causing a sensation. It was noticed that his talent as a team organizer and director was far superior to that of a racer. In 1932, Ferrari completely retired from racing.

Alfa Romeo sponsored Ferrari's racing team until 1933. It was the era when German car manufacturers like the Auto Union and Mercedes dominated the racing car market. However, Ferrari’s racing team pulled off a remarkable victory, when in 1935; Tazio Nuvolari of Scuderia Ferrari beat Rudolf Caracciola and Bernd Rosemeyer on their home turf at the German Grand Prix. In 1937, Scuderia Ferrari was dissolved, and Ferrari was retained as the sporting director of Alfa Romeo’s racing division Alfa Corse.

Enzo Ferrari left Alfa in 1939 after a disagreement with its managing director and founded Auto-Avio Costruzioni, supplying parts to other racing teams. He was under an agreement with Alfa Romeo, and according to the contract clause he could not use his name for four years for racing or designing cars. However, he managed to manufacture two cars for the 1940 Mille Miglia. Alberto Ascari and Lotario Rangoni drove these cars.

During the World War II, Enzo Ferrari's company was compelled to undertake war production for Mussolini's fascist government, supplying auto parts to the Italian Military. Following Allied bombing of his factory, he moved his factory from Modena to Maranello. After the conclusion of the World War II, he concentrated on making powerful racing cars bearing his name and established Ferrari S.p.A. in 1947. In 1948, his car debuted in Turin and the first win involving the car from the Ferrari stable came later in the same year in Lago di Garda. His car had a major victory at the 1949 24-Hours of Le Mans.

The success of Ferrari racing cars continued with a major win in the British Grand Prix in 1951. Ferrari car driver Alberto Ascari won the World Racing Championship in 1952 and 1953. Enzo Ferrari started manufacturing passenger cars around 1953 and the who’s who of the world lined up for acquiring these dazzling cars in their collection.

Enzo Ferrari married Laura Dominica Garello Ferrari in 1932. Their son Alfredo Dino Ferrari died from muscular dystrophy in 1956. He had a second son, Piero with his mistress Lina Lardi in 1945. He recognized Piero as his legal son only after the death of Lina in 1975.

Ferrari died on 14 August 1988, in Maranello at the age of 90. The declaration of his death was made two days later as per his request.