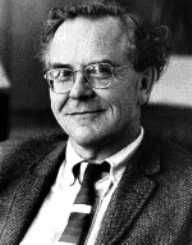 Geoffrey Wilkinson was born in Todmorden, West Yorkshire, England  on July 14, 1921. He was an English chemist. He established himself in inorganic chemistry and homogeneous transition metal catalysis. He is also a Nobel Prize Winner. He won the Nobel Prize in Chemistry in 1973. He won the prize with German chemist Ernst Otto. He taught in several institutions including Harvard University, Massachusetts Institute of Technology, University of California and Imperial College in London. He also worked at the Atomic Energy Project situated in Canada. During his lifetime he has also received several awards. He also held the title of a knight. He died on September 26, 1996.

Geoffrey Wilkinson was born on July 14, 1921, in Springside, Todmorden, in the West Riding of Yorkshire. He was born to Henry Wilkinson who was a painter and decorator and Ruth Wilkinson who was a worker at a cotton mill in his hometown. He was brought up alongside two siblings. Geoffrey developed interest in Chemistry when he used to accompany his uncle to chemical companies. His uncle married into a family that owned a chemical company that manufactured Epsom and Glauber’s salts for the pharmaceutical industry. He began his primary education at a local school.

In 1932, he won a county scholarship and went on to Todmorden Grammar School, in Todmorden, West Yorkshire for his high school education. The school had produced two Noble Laureates in a period of twenty five years. In 1939, Geoffrey won a Royal Scholarship to study at the Imperial College, London. In 1941, he graduated from the school with a Bachelors of Science Degree in Chemistry. When World War II broke out he was instructed to do some research work. His did the research under the supervision of Professor H.V.A Briscoe.

In 1950, he became a research associate at the Massachusetts Institute of Technology. At the institute, he focused on transition metal complexes of ligands like olefins and carbon monoxide. In 1951, Geoffrey got a job at Harvard University as an assistant professor. He held the post from 1951 to 1955. He then took nine months of from Harvard to go work with Professor Jannik Bjerrum in his laboratory in Copenhagen.  In 1955, he was appointed as the chair of Inorganic chemistry at Imperial College in London. In 1988, Geoffrey became Professor Emeritus. While at Imperial College he worked on complexes of transition metals and in compounds of unsaturated hydrocarbons.

Geoffrey was so committed to chemistry that his study of metal to hydrogen bonding led to the creation of the Wilkinson’s Catalyst which was made up of a rhodium metal complex with the middle metal being linked to 3 large phosphine ligands. He penned some textbooks including ‘Basic Inorganic Chemistry’, ‘Chemistry: An Investigative Approach,’ and ‘Advanced Inorganic Chemistry.’  He contributed in writing the first edition of ‘Comprehensive Coordination Chemistry: The Synthesis, Reactions, Properties, and Applications of Coordination Compounds’ which was published in 1987.

In 1965, Geoffrey Wilkinson was elected a Fellow of the Royal Society. In 1973, he received a Nobel Prize in Chemistry with German Chemist Ernst Otto. In 1980, he was conferred an honorary doctorate of science by the University of Bath. A hall of residence was named after him in 2009 by the Imperial College.

In 1952, he married physiologist, Lise Solver. Together they had two daughters, Anne and Pernille. Geoffrey died from a heart attack on September 26, 1996, in London.