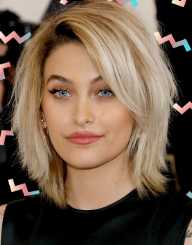 Paris Jackson, a famous American actress, model and singer was born on April 3rd, 1998. She was named after the French city in which she was born. She grew up in Neverland Ranch.

Paris Jackson born on April 3rd, 1998 to famous singer Michael Jackson and Debbie Rowe. She is the middle child and only daughter to the singer. She had two siblings Michael Joseph Jackson and half-brother Prince Michael Jackson. She didn’t grow up with her father, since they divorced with the mother in the year 1999, but was given to two godfathers Elizabeth Taylor and Macaulay Culkin.

Her father, Michael Jackson, died when she was 11 years of age.  During her early age together with her siblings wore masks whenever they visited public places to hide their black skin.

Paris Jackson together with her brother was enrolled at the Buckley School in Sherman Oaks Califonia. She participated in flag football, softball, and cheerleading. Paris after that went to a therapeutic school located in Utah. Here she went for her high school and college education.

Paris Jackson's career started in 2011 when she featured in Lundon's Bridge and the Three Keys. In May 2012 she managed to make to the Peoples magazine’s most beautiful list. In early 2017 she featured on the cover of Rolling Stone magazine. She then signed a modeling contract with IMG Models in March 2017. She starred in the film Gringo in 2018.

In June 23rd, 2018 with musician Gabriel Glenn formed a musical duo called The Soundflower and performed on different occasions.

A British actor by the name Mark Lester claimed that Paris Jackson was her biological daughter since he had donated sperm to Michael Jackson. This claim was dismissed later by their family lawyer, but her mother Debbie Rowe confirmed that she underwent artificial insemination to be impregnated.

She had been depressed from sexual assault and even tried committing suicide several times but was helped to overcome it.

She underwent surgery to remove a large abscess later on August 10th, 2018.

Together with her brothers, Paris Jackson received the Lifetime Achievement Award in 2010.  This was on behalf of their father.