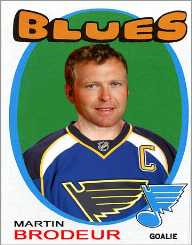 Martin Pierre Brodeur is one of the greatest ice hockey goaltenders to have ever graced the National Hockey League and the world at large. Born on May 6, 1972, the Canadian-American ice hockey star cemented his name in the NHL with a record of 691 career wins which is 140 more than Roy who now falls second on the NFL’S all-time list. With his prolific play during his stay at New Jersey Devils, he won five Eastern Conference titles in 17 post-season campaigns and three Stanley Cups.

Martin Brodeur played in international games for Canadaand won two Olympic medals in the 2002 and 2010 Winter Olympic Games with Team Canada and had also won several other medals with the team. He was named part of the 100 NHL Players in history during the All-Star Weekend in Los Angeles on January 27, 2017. Brodeur in 2015 after his retirement signed a three-year contract as an assistant general manager of the St Louis Blues of the National Hockey League.

Martin Brodeur was born in Montreal to Denis and Mireille Brodeur as one of their five children. His father was an ice hockey player and played for Team Canada in the 1956 Olympics and won bronze. Brodeur picked the career from his dad as he had aninterest in the game at a young age. At his early age, he played as a forward but later switched to goaltender when his coach offered the option during a youth tournament as the next season he started with that position. He was then taught varieties of style in the goaltender position including butter and stand-up which he grabbed with rapt attention.

Brodeur almost stopped playing the age of 12 when he was withdrawn from his for the team for not reporting for a game. But upon convictions from his brother Claude, he returned to the game. To perfect his goaltender skills, Brodeur enrolled at a camp of retired Soviet goalie Vladislav Tretiak prescribed the use of different methods. He made a debut in the Quebec Major Junior League in the 1989-1990 season playing for Saint-Hyacinthe Laser. Within that season he was able to make it into the QMJHL ALL-Rookie Team and in the 1991-92 season made the QMJHL 2nd All-Star Team. During the 1990 NHL Entry Draft, he was drafted in the first round, 20th overall by New Jersey Devils.

Martin Brodeur made an emergency entrance into the 1991-92 NHL season playing four games for New Jersey when goaltenders Chris Terreri and Craig Billington were injured. He was at the time playing for Utica Devils of the America Hockey League. His debut game in the NHL was against Boston Bruins winning 4-2 and also played in a playoff. He returned to Utica and played in the AHL the next season.

The 1993-94 season saw Brodeur returning to the NHL to play permanently for the New Jersey Devils. In that season, the Devils made the second-best record in the league and made it to the Eastern Conference Finals in the playoff but lost to New York Rangers. He was second in goals against average with 2.4 and also placed fourth in save percentage with .915 in 47 games in regular season. This impressive record made him ahead of Terreri.

Martin Brodeur had an impressive career with the Devils setting a single-season record for most minutes played by a goalie after playing 74 out of the 82 games in the 1995-96 season. That season he made it to the All-Star Game for the Eastern Conference stopping all 12 shots he faced. He won the Stanley Cup, Jennings Trophy, Vezina Trophy, Hart Memorial Trophy and several others.

Martin Brodeur also made several records with the team and also played in numerous All-Star Games. On January 27, 2006, he signed a contract extension of $31.2 million over six years with the Devils and in 2012 extended it with a $9 million to remain with the team. Brodeur’s impressive and record-breaking 21-year career with the Devils ended after 2014 as he entered the free agency market for the 2014-15 season.

Stepping in into the free transfer market in 2014, Martin Brodeur signed a tryout contract with St Louis Blues on November 26, 2014, when the team’s netminder, Brain Elliot was injured. He would later in December sign a year contract of $700,000 with the team. He, however, announced his retirement from the NHL on January 27, 2017, after the return of Elliot to the team. Elliot’s return caused Brodeur to be demoted to number three goalie.

The Brodeur Rule introduced by the NHL before the2005-06season was perceived to be targeted at Brodeur due to his puck-handling skills. The rule barred goaltenders from playing the puck behind the goal line except within a confined zone known as the trapezoid behind the net. Brodeur at the time was one of the best in handling the puck behind the net and therefore the perception that the rule was targeted at him. Hence the name "Brodeur Rule". Though there were concerns to revoke the rule in the 2009 season, such suggestions were overruled.

Martin Brodeur aside from playing in the NHL made an Olympic debut when he was selected as a backup goalie for Team Canada in the 1998 Winter Olympic in Nagano, Japan though he did not play in games. He was, however, part of the Team Canada in the 2002 Olympics in Salt Lake City, Utah winning gold for Canada. He played as starting goaltenders in that tournament after Joseph lost his position to him. He made 31 stops on 33 shots in the final against Team USA. He played in the 2004 World Cup of Hockey championship and again with an impressive play received only five goals in five matches. His other international tournaments include the 2006 Winter Olympics in Turin, Italy, 2010 Winter Olympics in Vancouver, Canadawhich he won gold. He had previously played in the 1996 IIHF World Championship and 1996 World Cup of Hockey.

Martin Brodeur has married twice, first in 1995 to Melanie Dubois with whom he had four children, Anthony, twin sons, William and Jeremy, and Annabelle Antoinette. The couple divorced in 2003 after Melanie filed for a divorce for extramarital affairs. Brodeur was at the time rumoured to be dating Melanie brother’s wife Genevieve Nault. True to that, Genevieve and Brodeur married in 2008 and had a son Maxime Philippe Brodeur in 2009. His autobiography Brodeur: Beyond the Crease co-authored by, Toronto Star columnist and ESPN contributor Damien Cox was released in October 2006. On December 1, 2009, he naturalised to become a United States citizen and currently lives in West Orange, New Jersey after moving from North Caldwell, New Jersey

Martin Brodeur has won several awards and honours including being part of the All-Rockie Team, Second All-Star Team, won the Calder Memorial Trophy in 1994, three Stanley Cups, four Vezina Trophy and five William M. Jennings Trophy. He was named part of the 100 NHL Players in history during the All-Star Weekend in Los Angeles on January 27, 2017