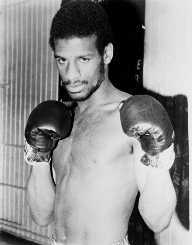 American boxer Michael Spinks was born on the 13 July 1956 in St Louis, Missouri. The family lived on  Pruitt-Igoe housing estate, which was demolished in 1976, was a tough place to grow up in. Springs subsequently experienced bullying as a child, and after his brother, Leon was attacked, he started boxing lessons at a local gym.

After winning the U.S. Olympic Trials Middleweight Championship in Cincinnati, Ohio, Spinks went on to beat Rufat Riskiev of Russia at the 1976 Summer Olympics which were held in Montreal, Canada.

Michael Spinks finished with a 93-7 amateur record with 35 knockouts.[6

After an amateur boxing career which saw 35 knockouts and a 93-7 record. Michael Spinks turned professional in 1977. He won his first title fight in 1981 when he defeated Eddie Mustafa Muhammad and gained the World Boxing Association’s light heavyweight title. Then in September 1985, Spinks then made history by putting on an extra 25 pounds of weight and contesting the heavyweight title. He fought Larry Holmes in a 15-round bout for the International Boxing Federation title but was stripped of the title for not making a mandatory defense. He then fought Mike Tyson on the 27 June 1988 and was knocked out in 91 seconds. Shortly afterward, Spinks returned from professional boxing.

Over the course of his professional boxing career (1977-1988) Spinks fought 33 fights and won 32. Twenty-one of these bouts were won by knockouts.

In 1994, Spinks was inducted into the International Boxing Hall of Fame.

Michael Spinks’s partner was Sandy Massey, and the couple had one child, a daughter  Michelle who was born on 3 December 1980. Then in 1983, Massey was killed in a motor accident.