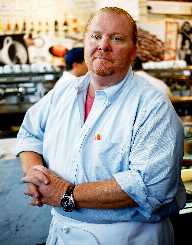 American chef Mario Batali was born on the 19 September 1960 to Armandino and Marilyn Batali and was raised in Seattle.

Mario Batali attended high school in Madrid, Spain. He then became a student Rutgers University in Seattle where he studied drama and business management. He also spent some time at the Cordon Bleu School of Cooking in London in the UK.

After spending three years in the village of Borgo Capanne in northern Italy, Mario Batali returned home to the United States. Before establishing his restaurant in New York, he worked at the Four Seasons Clift Hotel in San Francisco and the Four Seasons Biltmore. He then relocated to New York City and worked at Rocco’s, an Italian restaurant before opening his own place restaurant.

Following the success of his first restaurant, Mario Batali opened some other New York restaurants including Lupa, Esca and Otto Enoteca Pizzeria as well as a wine shop, Italian Wine Merchants. He also is part-owner of restaurants in Boston, Connecticut, New Haven, Las Vegas, Los Angeles and Singapore. His partner is Joe Bastianich, and their company is the B&B Hospitality Group.

Babbo Ristorante e Enoteca in New York City was named the Best New Restaurant of 1998 by the James Beard Foundation. It also was awarded three stars by Ruth Reichl of the New York Times. Babbo is a one star Michelin restaurant. In 1999 Mario Batali was named Man of the Year by GQ’s in their chef category. Other awards include the 2005 James Beard Foundation award for All-Clad Cookware Outstanding Chef Award and Best Restaurateur (2008). He has also been inducted into the Culinary Hall of Fame.

Mario Batali is married to Susi Cahn, and they have two children, Leo and Benno. The family live in Greenwich Village and have a second home in Northport, Michigan.

Mario Batali is opposed to fracking for gas and actively campaigns against it.

Organisations Mario Batali is involved with include The Lunchbox Fund, which provides meals to schools in Soweto, South Africa. He founded the Mario Batali Foundation which focuses on helping children. He is also a supporter of the David Lynch Foundation as well as the Food Bank of New York City.