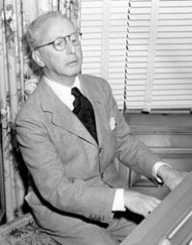 Jerome Kern is one of America's greatest musical exponents. The music he made continues to live in the hearts and minds of many long after his death. He was known as a great music composer, writing over seven hundred songs. He is undoubtedly a legend. Let us get entertained as we get to know more about this musical genius.

Jerome Kern was born on the 27th of January, 1885 in Sutton Place, New York. His father, Henry Kern was an immigrant of German Jewish origin while his mother, Fannie was of Bohemian ancestry. His father ran a stable, while his mother was a teacher. Kern grew up in Manhattan and attended the public schools there. He showed his love for music from his formative years and began to learn to play the piano and organ, with a helping hand from his mother. After his family moved to New Jersey, Kern attended Newark High School.

Jerome Kern continued to showcase his burning passion for music, and he wrote songs as well as playing the piano for his school. Kern's father, however, did not want him to go into music. He wanted his son to join him in his business. Kern's passion, however, was so great and he almost cost his father his company when he ordered 200 pianos instead of two, from an Italian. This made his father allow him to chase his dream. Kern attended the New York College of Music where he studied the piano and harmony. He also would train under private tutors in Heidelberg, Germany.

Jerome Kern moved to London where he took up permanent residency. He then began to compose songs for British Hallway shows. He returned to New York barely a year after and started to work for music publishing houses. In 1904, he would go on to secure a job as a composer tasked with making the British productions dominating the Broadway shows then more American. Some of the shows which he helped in interpolating are Mr. Wix of Wickham and An English Daisy.

Jerome Kern would go on to join T.B Harms and Co. which was another music publishing company and which would later publish Kern's works. Kern's primary task was writing music interpolations for the Popular British shows that filled Broadway theaters. By doing this, Kern was adding to himself valuable experience that did serve him well when he began his career. His breakthrough did come when his adaptation for the song "They Didn't Believe Me," originally written by Edward Laska was very much loved by all. The adaptation was for a show, "The Girl from Utah." This show made Kern very much famous and well known as a significant American Composer.

By 1915, Jerome Kern had started writing musicals for the Princess Theater in New York. There he composed Nobody Home, Very Good Eddie, Oh Boy! and Oh Lady! These works were very new to musical theater and took many people by surprise. This new approach to musical theater compositions was developed by Kern, Guy Bolton, a librettist and later on P.G. Wodehouse, a lyricist. The approach consisted of unrelated numbers stringed together, with few characters and sets. It was then replaced by more complex, coherent songs with more believable and realistic characters.

Jerome Kern wrote the shows, "Sally" and "Sunny." These shows had plots that seemed silly had prominent casts and great sets. Kern continued to write more musical theater shows and continued to gain a very popular reputation. His most popular work, "Show Boat" was written in 1927. It was done in collaboration with lyricist, Oscar Hammerstein II. Show Boat included songs like Can't help lovin' Dat Man, Ol' Man River and Make Believe, which was very much simplified and influenced other Broadway composers to adopt its style. Show Boat more recently faced some disposition from protesters who tried to ban its revival in 1993, citing that the musical had racist attitudes. However, it made its return to Broadway in 1994 and went on to record great success.

Jerome Kern continued to record high-quality musicals such as 'The Cat and the Fiddle,’ Music in the Air, and Roberta, which was done in the 1930s. By the 1940s, he delved into the Hollywood scene and would devote the remaining years of his career composing musicals for the movies. He composed for a film such as Fred Astaire-Ginger Rogers Swing Time, which had songs like "A Fine Romance" and "The Way You Look Tonight." Kern did not relent on his writing as he had a hand (either by writing or contributing) in about 37 shows during his great career. He was working on "Annie Get Your Gun" before his sudden death.

Jerome Kern got married to Eva Leale, an English woman in the year 1910, and became anglophile. They often went on vacations together, using their yacht, christened Show Boat after his famous musical. He enjoyed engaging in the collection of rare books. He also enjoyed betting on horses. Kern suffered a cerebral hemorrhage on the 5th of November, 1945. This incident occurred while he walked around the street corner. His friend, Hammerstein, with whom he composed Show Boat, was beside him on his sickbed when he died, aged sixty.

Kern was buried at Ferncliff Cemetery, Westchester County, New York. He left behind his wife, Eva and their daughter, Betty Jane. He also left behind his beautiful music and lessons for us all. He was a great composer, arguably the most celebrated American musical theater composer ever to have graced earth. He revolutionized the music of the theater, and his marks remain till this day. His musicals will remain evergreen in our hearts and minds. Surely they will.