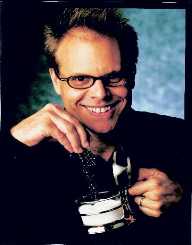 Alton Brown was born on July 30th in 1962. His place of birth was California Los Angeles. He is an American celebrity famous for his chef prowess as well as his exceptional writing skills. In addition to these, he is also a cinematographer. He has spent a decade in the film industry with some of his shows gaining him popularity over the years. Good Eats is one of his TV shows where he gets to play the host. The show has been aired for 14 seasons.

Alton Crawford Brown was born on July 30th, 1962. His place of birth was in Los Angeles, but he spent more time in Georgia during his youth stage. Brown father, Alton Brown, Sr., was a media executive in Georgia. A few years later while residing in Georgia, Brown’s father took his life away. His mother decided to get married again.

During his college years, Brown attended the University of Georgia where he studied film. This later made him stand as the cinematographer during the late 80s and early 90s for music videos such as "The One I Love"– R.E.M.

Brown's early career was characterized with aspirations to make a difference in the TV industry. Sources claim that Brown found cooking shows on American TV to be unimpressive. This was part of his motivation to enter into the TV industry by coming up with his reality show. He enrolled in cooking classes at New England Culinary Institute and graduated in 1997.

His dreams and aspirations for starting his show came to reality a year after his graduation. This was in July 1998. Good Eats pilot episode was aired during this time. The pilot show was aired in one of Chicago’s TV station, WTTW. The show went on to air in the same station for about a year before being taken over by Food Network. Around the same time (1999), Brown and his wife, welcomed their firstborn girl child, Zoey.

The show was a success as it was part of the nominees for the Best T.V. Food Journalism Award in 2000. Six years later, Good Eats received Peabody Award.

In addition to his success in the film industry, Alton Brown is a renowned author primarily for the book; I'm Just Here for the Food which secured him several awards as the best cookbook and that it later became the bestselling cookbook in 2002.

His fame in the kitchen field landed Brown some roles in commercials and infomercials. For example, he has worked with General Electric (GE) by featuring on their adverts. As for the infomercials, Brown flaunted the pros of using GE products including refrigerators, water purifiers, dishwashers and many more.

Other promotions that he was featured on was for Heifer International, Dannon yogurt, and Shun knives.
In 2011, Brown announced on Twitter that he was bringing to an end his show that had been running for 13 years.

Alton Brown is a pilot and a motorcycle aficionado. He lives with his family in Marietta, Georgia.