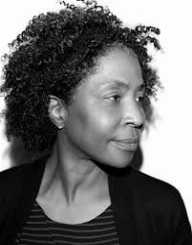 Lorna Simpson was born in the borough of Brooklyn, New York, on August 13, 1960. Her mother, Eleanor, was an African American. Her father, Elian, was of Jamaican-Cuban descent.

Lorna Simpson attended the High School of Art and Design in Manhattan. In summer, she took art classes at the Art Institute of Chicago. She then studied photography at the School of Visual Arts. During her studies, she was an intern at the Studio Museum in Harlem. In 1983, she earned a Bachelor of Fine Arts. She then studied conceptual art and photography at the University of California at San Diego. She studied under professors and artists like Eleanor Antin, Allan Kaprow, Jean-Pierre Gorin, and Babette Mangolte. In 1985, she earned a Masters of Fine Arts.

Lorna Simpson became known for creating photo-text artworks. She mostly depicted African-American women, dealing with issues such as racism and poverty. She created works such as Necklines, Easy for Who to Say, and Guarded Conditions. She had solo art exhibitions at the Portland Art Museum and the Denver Art Museum. She became the first African-American woman to exhibit her works at the Museum of Modern Art and the Venice Biennale.

In 1991, Lorna Simpson made a series of Polaroids titled Back and a photogravure titled Counting. She also created the Five-Day Forecast, a series of photographs and plaques exhibited at the Tate Modern Museum in London. She made the prints Untitled and The Waterbearer. In 1994, she created Wigs, an exhibition about the beauty standards in the black community. She exhibited her work in museums and galleries in New York City, Miami, Toronto, Chicago, Houston, Los Angeles, San Diego, and many other cities.

Lorna Simpson also began to experiment with video installations, such as Corridor. In 2009, she started using her self-portraits in her works. In 2013, she toured Europe, exhibiting her art in England, Spain, France, Germany, and Switzerland. In 2016, she made the cover art for Black America Again, the album of rapper Common. She was featured in Grace Bonney’s book In the Company of Women. In 2017, she published a series of portraits in Vogue Magazine.

Right after earning her master’s degree, Lorna Simpson received the National Endowment for the Arts Fellowship. In the 1990s, she won the Louis Comfort Tiffany Award, the College Art Association Distinguished Body of Work Award, and the Wexner Artist Grant. She later won the Whitney Museum of American Art Award, the Christian A. Johnson Distinguished Artist Award, and the J. Paul Getty Medal. She was one of the finalists for the Hugo Boss Prize and the Deutsche Borse Photography Prize.

Lorna Simpson was married to artist James Casebere from 2007 to 2018. They have a daughter named Zora.