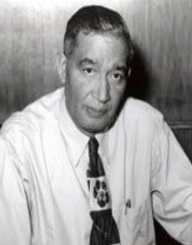 Frederick McKinley Jones was an American mechanical inventor who patented over 60 inventions during his lifetime.

Frederick McKinley Jones, commonly known as Frederick Jones was born on May 17, 1893, in Cincinnati, Ohio. He was the son of an Irish American John Jones and his African American wife. His mother left them when he was a child. He grew up under the care of his father. At the age of seven, he went to live and study under Father Ryan at the local Catholic Church. Jones was not accepted to any children home partly due to his maternal African heritage. His father died when he was 9.

Jones worked at the parish and expressed a clear interest in mechanics. He was encouraged by his mentor Father Ryan to pursue the vocation. He interacted with various models of cars as he cleaned them at the church. He worked hard to please his wealthy car owners during their visits at the car wash. He became inquisitive to understand the mechanical nature of any car he came across. He grasped the mechanical systems fast. He taught himself by practically doing things, rather the conventional theory. Car owners volunteered information to his questions.

In 1904, Jones left the confines of the parish at the age of 11. He was employed at a garage in his hometown. He cleaned the garage and continued observing and helping out in mechanics. At the age of 14, Jones became a fulltime mechanic. He became the garage mechanical supervisor the following year. He developed an interest in car racing. He started working on racing cars. He angered his employer who discouraged him for his age. Jones persisted in his ambition and often quarreled with his employer. He was sacked from the job at the age of 19.

He left and got employed as a mechanic at a hotel in Minneapolis. He was noticed by a visitor who offered him work on his farm. Oscar Younggren put Jones in charge of the mechanical maintenance of the 50,000-acre farm in Hallock. He worked on the farm for two years. In 1915 Younggren sold the farm. Jones stayed in Hallock and worked as a mechanic for the next 18 years. He started studying electrical engineering through a correspondence program.

He joined the military and fought in WW1. After he was discharged, Jones returned to Hallock. During his military service, Jones was attached to an African American unit. After his seniors discovered his talent, Jones was given more responsibilities. He wired electrical gadgets and did other mechanical repairs for units in the camps. He became in charge of the military communication systems on the battlefield. Jones worked on military vehicles and deployment portable medical equipment. He was discharged with the rank of Sergeant, a rare fete for an African American then.

In Hallock, Jones built a film projector. He added sound to the moving pictures. He constructed a radio transmitter for the town. He was employed by Joseph Numero, a businessman from Minneapolis. Jones was tasked to improve the sound quality of the film production machines at Cinema Supplies. He improved the sound clarity on the machines Numero supplied to the market. He never patented his inventions exposing his ideas to piracy and duplications. Jones created a movie theater ticket dispensing machine. He patented the machine on June 17, 1939.

Jones created the first truck refrigerated system for a business friend of Numero. Harry Werner transported perishable food using trucks. Due to the heat in the trucks, he suffered loses for lack of preservation. He approached Jones for help. Jones created the system which Numero thought as farfetched. He patented his invention in July 1940.

Jones and Numero founded a partnership company called the U.S. Thermo Control Company. They created a mass production of refrigeration facilities across the market. It later changed its name to U.S. Thermo Control Corporation. Jones worked with electrical and mechanical engineers at the company. He baffled them with his grasp of systems without any formal training. He was impatient with the theoretical students. He emphasized on a hands-on approach to fixing problems by practically getting involved.

His refrigeration inventions created a boom in the transportation of fresh food to far-flung areas. His invention was mounted on airplanes, ships, and hospitals. He made cooling units for the US military during WW2. The military used the units to transport and preserve medical, food and blood supplies to the frontline in battle. When the war ended, Jones created cooling systems for ambulances and other medical carrier units. Jones also invented portable X-ray machines, sound systems, and propeller engines. Ones lost most of his inventions to piracy. People stole his ideas and patented them before he could claim them. In all his inventions, Jones patented 61 of them.

In 1944, he became the first black member of the American Society of Refrigeration Engineers. In 1977, the Minnesota Inventors inducted him into their Hall of Fame.

Frederick Jones died on February 21, 1961, of lung cancer in Minneapolis. His invention formula in refrigeration is still in use decades after his death.