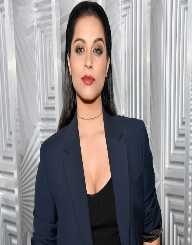 Born on September 26, 1988, Lilly Singh is a famous actress, comedian, YouTube personality and vlogger. Born Canadian but of Indian descent, she has also pursued a career in writing. Singh is best known with her YouTube channel IISuperwomanII. The channel which started in October 2010 has gained over 1.7 billion views with about 11 million subscribers since the first video upload. She is ranked behind Atwood and PewDiePie as the world’s third highest paid YouTube star earning $7.5 million according to Forbes in 2016. Aside from being a YouTube star, she has ventured into acting with her debut feature film A Trip to Unicorn Island in 2016. Other entrepreneurial ventured includes the outdooring of red lipstick, BAWSE in collaboration with Smashbox.

She has also released a book titled, How to be a Bawse: A Guide to Conquering Life. Since 2014, she has been featured in YouTube Rewind and has received several awards including MTV Fandom Award and Streamy Awards. Singh channel is among the 100 most subscribed YouTube channels since 2017.

Lilly Singh was born on September 26, 1988, in Scarborough, Toronto to Malwinder and Sukhwinder Singh. Her parents are from Punjab, India. Singh had her early education at the Mary Shadd Public School and later at the Lester B. Pearson Collegiate Institute where she graduated in 2006. Growing up Singh recalls being a tomboy. She furthered her education at the York University where she graduated with a Bachelor of Arts degree in psychology in 2010. Having an Indian descent, Singh connected well to the Punjabi heritage as she visits India. Singh involvement in YouTube at the start was to ease herself from the depression she was going through.

Lilly Singh ventured into YouTube as a way of dealing with her depression. With this, she started a YouTube channel under the alias"IISuperwomanII in October 2010. According to her, the name was inspired by her childhood believe that she had an invisible S on her chest and that she can do anything. Most on her YouTube uploads usually features the Punjabi culture, the humorous side of everyday life and dealing with people’s favourite complaints.

During this time she released her famous video How Girls Get Ready and in the series which featured her fictional parents, Paramjet and Manjeet all played by herself. In the video, Lilly Singh's parents are seenreacting to controversial and trendy videos. The channel also has the segment's Ask Superwoman Live whichallows her fans to ask her question on the 14th of every month.

Lilly Singh launched the YouTube channels of her childhood idol Dwayne Johnson in July 2016on which she collaborated with him for video uploads. Another channel,#GirlLove, which features celebrities and inspirational personalities, was launched on the same night. The channel aims at addressing and eradicating the hatred in the female population. She gained a diamond playbutton on September 25, 2016, despite not reaching the 10million subscriber milestone. She currently has over 11 million subscribers in 2017.

Lilly Singh desire to explore other opportunities and reach out to many resulted in the creation of her second channel SuperwomanVlogs in December 2011. On that channel, she records her daily activities including behind the scenes footage of the videos. It was initially playing second fiddle to IISuperwomanII where she posted videos until August 2014 when she turned it into a vlog. SuperwomanVlogs as at the beginning of 2017 had over 1.8 subscribers and over 210 million views.

Lilly Singh made a music debut in August 2013 by featuring in the Punjabi song Hipshaker. A year later, he rapped in the song Mauj Ki Malharen which featured in the Bollywood drama Gulaab Gang. He, however, released her debut song#LEHin collaboration with author and rapper Kanwer Singh in July 2014. She followed it with a music video The Clean Up Anthem with Canadian artist Sickick in February 2015. Other songs like #IVIVI and later the visual music Voices on YouTube in 2016 subsequently followed.

Lilly Singh made an acting debut in 2011with as a background dancer in Speedy Singhs and Thank You. Nonetheless, her most visible role was in the Indo-Canadian film Dr. Cabbie in 2014. She then appeared in the documentary A Trip to Uniform in 2015 and a cameo role in Bad Moms in 2016. She lends her voice to miniature unicorns, Bubbles and Misty in the film Ice Age: Collision Course also in 2016. Singh has also featured in Disney Channel series Bizaardvark in 2017. She has also appeared in her own film Lana Steele on YouTube.

Lilly Singh started the tour A Trip to Unicorn Island in March 2015 in which she infused her YouTube contents with singing, comedy, dancing and other performances. She took the tour to India, Canada, New Zealand, Australia, Trinidad and Tobago, Hong Kong, Dubai, Singapore, UK, and the United States. The tour was documented in her debut feature movie, A Trip to Unicorn Island which was released on February 10, 2016, on YouTube Red. The movie was late premiered at the Chinese Theater in Los Angeles and was attended by guest from YouTube communities including Alyson Stoner, Bethany Mota, and Joey Graceffa among others.

Lilly Singh has found a way to giving back to the society through her partnership with MetoWe in the #GirlLove Rafiki Bracelet promotion. Proceeds in the sale of these bracelets are used to fund girl child education in Kenya. Singh got involved setting a first target of selling 5000 bracelets and the second target of 10,000 which she exceeded by selling 14,000 of the bra

Lilly Singh has also ventured into writing with the release of her first book, How To be a Bawse: A Guide to Conquering Life on March 28, 2017. The embarked on a book tour a day before the release.