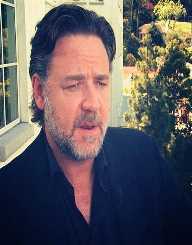 Russell Crowe is an Australian and New Zealand actor who is famously known for his Gladiator movie role. Since his childhood, Russell was blessed with immense talent. He is always able to present clear, 100% and notable performance. Crowe has left other actors and actresses behind time, all thanks to his top-rank stance. Till now he has shown to be the leading man in the acting industry.

On April 7, 1964, Russell Crowe was born in New Zealand, Wellington to Jocelyn Crowe and John Alexander. He is the youngest son of his elder brother Terry Crowe. At the age of four, his parent opted to take him to Australia where his brother lived. They had previously developed a movie catering business that encouraged Crowe to join the acting field.

It was quite hard for him to adapt to the setting since his parents concentrated more on their work. At the age of sixteen Russell fancied himself as a self-learned singer. He went along and nicknamed himself a ‘Russ Le Roc.' He later formed a Roman Antix group, and they used to practice in his free time. In 1980, he recorded ‘I Want to Be like Marlon Brando’ single title. Before that, he used to play in the 30 Odd Foot of Grunts band, which he still does today.

Time passed, and Russell Crowe opted to join the National Institute of Dramatic Art. Unfortunately, he was disappointed when his acting manager mentioned to him that acting wasn’t his thing. He decided to tour Australia with his musical talent. By the age of 25, Russell managed to gain his popularity in the Australian movie such as Prisoners of the Sun in 1990. The same year he played The Crossing movie that starred his wife, Danielle Spencer. There and then he received his first nomination award.

Russell Crowe finally caught the attention of Hollywood by playing ‘Romper Stomper’ in 1993. This time he became remarkable famous by winning The Best Actor award. Not only did he win a recognition but also signed a contract of playing ‘The Quick and the Dead.’ Russell’s hype increased more in the United States.

Following his American triumph, famous directors such as Michael Mann and Ridley Scott were in their shoes to crown him with more upcoming projects. Phew! After given a shoulder back when he was trying to learn the ropes, he is now competing with the Oscar thespians.

In 1995, Russell played a sci-fi movie called ‘Virtuosy’ as the main serial killer. He followed it up with ‘L.A Confidential’ in 1997. The series brought him into the international fame and also won Best Screenplay and Best Actress Awards. As he prepared for his role in Bud White as the racist, Crowe yawned-down his energy at the gym just to get the preferred physique. He aimed to have that macho stance that he even suggested wearing a smaller size suit.

Russell Crowe continued to stick to his tried and tested friends who majored in several films. The most prominent movies include The Gladiator, Master, and Commander. In 2005 and 2008, he played Beautiful Mind, Cinderella Man and the State of Play. In the process, he garnered Film Institute Award for being the Best International Actor. His last movies include Les Miserables in 2012, Man of Steel and Noah in 2012.

Russell Crowe married his longtime partner Danielle Spencer on April 7, 2003. They have two sons; Tennyson and Charles. In 2012 they parted ways. In addition to his personal life, Crowe used to smoke in his teenage life. For thirty years of his experience, he used to smoke more than 50 cigarettes a day. So, for the sake and mercy of his two sons, he stopped with immediate effect. Russell has a family relationship with former New Zealand cricket players Captain Jeff Crowe and Martin Crowe.