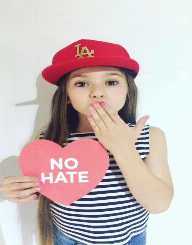 Junior model and social media star Mariamstar1 was born in Sydney, Australia on the 7 July 2006. She started singing and dancing as a young child. She is the youngest of five children with two older brothers and two older sisters. The family is currently living in the United States.

The young girl gained popularity when her mother began posting video clips of her daughter on social media, particularly Musical.ly and YouTube.

Mariamstar1 lip syncs and dances to hits by stars such as Madonna and Jennifer Lopez. Mariamstar1 has also added comedy to her repertoire including mimicking politicians and celebrities.

She has over 500K followers on social media

Mariamstar1 is anti-bullying and puts this message across in her videos.