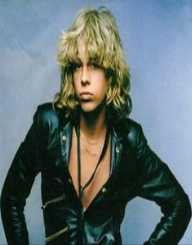 Actor and singer Leif Garrett was born on the 8 November 1961 in Hollywood, California. He had two sisters Dawn Lynn and Debralee Scott.

Leif Garrett started acting at a young age. One of his first roles was as a juvenile patient in Devil Times Five. He also appeared in The Odd Couple, Chips, Gunsmoke and Wonder Woman. Garrett was Kirsty McNicol’s character’s boyfriend in Family and rose to prominence after starring in Bob & Carol & Ted & Alice (1966). Over the course of his acting career, he appeared in over sixty productions including the television special Peter Lundy and the Medicine Hat Stallion. He co-starred in The Outsiders (1983), and in 1991 he starred with David Cassidy in Spirit of ‘76, a 1970s spoof.

In 1977 Leif Garrett signed up with Atlantic Records and released his first album. His cover version of Surfin’ USA was a hit, and he quickly became a teen idol. He recorded two more albums with Atlantic Records, Feed The Need (1978) and Can’t Explain (1980) before moving to Scotti Brothers. Garrett made another two albums Same Goes For You (1979) and My Movie of You (1981). The Leif Garrett Collection, a compilation of his greatest hits, was released in 1998. Feel The Need (1978) contained I Was Made For Dancing which became Garrett’s biggest hit.

After finding stardom at a young age, Leif Garrett had an ongoing problem with substance abuse.