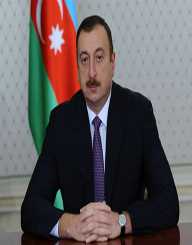 Ilham Aliyev is the current president of Azerbaijan who has been holding that office since 2003. He is known to be the fourth president of Azerbaijan that succeeded his father Heydar Aliyev who was the president between 1993 and 2003. He is the head of National Olympic Committee as well as New Azerbaijan Party. He also has to his name two national honors – Heydar Aliyev Order and Order of Sheikhulislam. Apart from this, Ilham Aliyev has earned some awards outside the country. These awards include the Grand Cordon Order of Merit which was bestowed on him by the International Military Sports Council and the SergiyRodonejskiy, the first-degree Order of Russian Orthodox Church among others. He also has been conferred some honorary degrees by different universities including the Universities in USA, Russia and South Korea. For his autocratic role in Azerbaijan, he is considered to be very controversial and marked as the leading man in corruption in Europe.

Ilham Aliyev was born on the 24th day of December 1961 to a prominent political leader in Azerbaijan who later became the third president of his country, Heydar Aliyev, and ZarifaAliyeva. He was born in Baku. His mother was an academician, professor, and an ophthalmologist while his dad ruled the country between 1993 and 2003. He schooled at No six before enrolling at Moscow State University of International Relations.

Ilham Aliyev pursued his studied there and graduated till he earned his Ph.D. in 1985. He served at his alma mater as a teacher between 1985 and 1990. He is very fluent in English French, Turkish and Russian. He is indeed a businessman who works with a group of private production-commercial undertakings. He is so encompassing women and always gambling; this was the lavish lifestyle of his was rumored to be the reason for the close down of all the casinos in Azerbaijan.

The State of Oil Company of Azerbaijan Republic inducted him as its vice-president. Ilham Aliyev was known to be very prominent in settlement of the contract of the century which was a contract between the government of the day and the Western Oil Company. Later on, in 1995, he got elected to the parliament of the Republic, MilliMajlis. He further served as the President of National Olympic Committee in 1997 and contributed a lot to the movement and development of the sport. He received an award as a result of this. Ilham Aliyev later got elected to the parliament again in 2000, and by 2001, he started heading Azerbaijan delegation at the Parliamentary Assembly of Council of Europe and this he did up to 2003. He was however elected in August 2003 to serve as the Prime Minister of Azerbaijan. Ilham Aliyev was however elected as the new President of the country after his father stepped down from the office because of his health status. He assumed powers on the 31st of October, 2003.

Ilham Aliyev was condemned by the opposition saying that he infringed the law by becoming the chair of New Azerbaijan Party as President is meant not to be affiliated with any political party. He was however elected in 2008, but this election was surrounded by controversy as the opposition did boycott the polls. A referendum was organized by him to remove the term limit and limit freedom of the press. This action was cited by the opposition as an infringement of the human right. It was also reported that the parliament was full of Aliyev loyalists in 2010 and no opposition was a part. Over four hundred people were arrested when several protests rock the country against his rule. The 2013 election that brought him for the third time was known to be filled with inconsistencies and criticised by many. He has also mentioned that he would capture Nagorno-Karabakh along with the whole of Armenia as he has declared Armenians to be enemies. By 2012, he was declared the person of the year, by the Organised Crime and Corruption Reporting Project.

Ilham Aliyev married Mehriban Aliyeva on 22nd of December, 1983. She is the present head of Heydar Aliyev Foundation and had three children- Leyla, Arzu, and Heydar. According to reports, two of his children – Leyla and Arzu have properties of over 50 million pounds in accounts in London, Dubai, and Paris. His eleven years old son, Heydar, has nine mansions in Dubai which worth 44 million dollars.