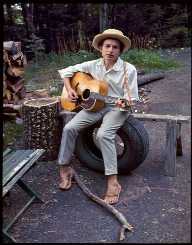 Bob Dylan was born Robert Zimmerman on May 24, 1941. His parents were Abram and Beatrice Zimmerman. The singer was born into a Jewish family but later converted to Christianity. He changed his last name to Dylan when he was in college, after one of his favorite poets, Dylan Thomas, who died when Bob was a teenager.

Bob Dylan attended the University of Minnesota. It was here that he developed his interest in folk music. He never graduated, as he dropped out of school to pursue music full time in 1960.

Bob Dylan first began playing in clubs in 1961. He released his first album in 1962, titled Bob Dylan. The album did not sell well, but it did not deter him from continuing to make music. He released his next album, The Freewheeling Bob Dylan, in 1963. This album was a hit from the beginning. It was filled with folk songs, protest anthems, and love ballads. There was something on the album for everyone.

Throughout the rest of the 1960’s through the 1970’s, Bob Dylan was a popular name. He toured around the United States, and also traveled through some parts of Europe, and Japan. He began to visit more often in the 1980’s. His touring started to slow down in the 1990’s, but his popularity began to go down. He continued to write music and perform in shows throughout the early 2000’s. His latest song was released in 2017. Some of his most famous albums are listed below.

Bob Dylan is well known for his political activism. He worked tirelessly in activism causes beginning in the early 1960’s. He rallied for civil rights causes. He played in countless rallies and protests. He was involved in popular protests, like the Freedom March, where Dr. Martin Luther King Jr. gave his famous I have a Dream speech. The more involved Dylan became in integrated cities, the more he hated the idea of segregation.

Bob's hatred for racism, mingled with his disenchantment with the United State’s political agenda, encouraged him to write some songs to help with his causes. In the mid-1960’s, he stepped away from the protests and went into the studio to record songs as a peaceful form of protecting the civil rights cause. He has written many political songs, including, Hurricane, George Jackson, and Masters of War.

Throughout his lengthy musical career, Bob Dylan has won 43 awards (including 12 Grammys) and has been nominated for 27 others. He has also been nominated and received countless prizes and awards. Some of his songs that have won awards include Things Have Changed; Gotta Serve Somebody, Cold Irons Bound, Someday Baby and Like a Rolling Stone. He has also won a Grammy for the Lifetime Achievement Award. Eight of Bob Dylan’s songs and albums are also in the Grammy Hall of Fame.

Bob Dylan was inducted into the Rock and Roll Hall of Fame in 1988. Five of his songs (Blowin’ in the Wind, The Times They Are a-Changin, Like a Rolling Stone, Subterranean Homesick Blues, and Tangled Up in Blue) are also listed in the hall’s 500 Songs that Shaped Rock and Roll.

Bob Dylan received the National Medal of Arts in 2009.

Bob Dylan was awarded the Presidential Medal of Freedom in 2012.

Bob Dylan won the Nobel Prize for Literature in 2016 for his poetic musical lyrics.