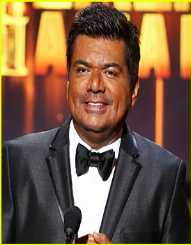 No matter what the situation and life throw at him, George Lopez is the real definition of a never give up a soul. Right from childhood, he has lived his life all by himself. Yes, his parents were alive, but George can’t tell you what a motherly and fatherly love feels like. He was once abandoned, insulted and felt sick, but this didn’t stop him from achieving his dreams. Persistence is his second name. From grass to grace, Lopez is now known as the most multi-talented man on planet earth. His career encompasses; stand-up comedian, late-night television host and many roles in different films. He will always remain to be the most distinguished Latino in the entertainment industry.

On 23, April 1961 George Lopez was born in Mission Hills, Los Angeles,  California, the United States to Frieda Lopez and Antonio Lopez. At only two months his father abandoned his family without having hopes that he will come to return. His mother also opted to take the little child (George) to his working-class grandmother, Benne Gutierrez, and step-grandfather, Refugio. His mother remarried and moved to San Francisco. He wasn’t in good care since the couple lacked parental skills, financial resources, and affection that Lopez wanted from the start. The irony came when Lopez embraced desperation, anger, impoverishment and most of all he lacked a mentor. In short, Lopez used his challenging experience as his building block to droll further. Lopez visualized himself in a sitcom stage, and it was his only desire after high school studies. But that was just a dream; he had a long journey of quarters, halves and kilos. He tried to perform at a local club circuit for two decades till the early 90s.

On a prayer and hope George Lopez proved his childhood experience wrong. In 1990 he starred several television sitcoms such as Ski Patrol, Fatal Instinct, and Murder Investigator. He also excelled in stand-up comedy which he enjoyed the most. He received a countless invitation from prominent places such as Las Vegas Hilton, Foxwoods Casino, and an Antonio among others. Not to mention Lopez performed for the President at the Ford’s Theatre in Washington, D.C. In 1999 Lopez was given a chance to host the radio show in L.A. He cropped the first ladder as the first Latino to host a radio show on an English Language station. In the mid of 2000, George took a drama role in the Bread and Roses film that was directed by Ken Loach, a British filmmaker. To his surprise, the film garnered him more recognition.

In 2001 George Lopez stand-up comedian show commenced titled ‘Right Now.’ He followed it up with Team Leader in 2002.To his surprise; he received two Grammy Awards for setting the Best Comedy Albums. From 2002 to 2004 George Lopez saw himself performing several roles in films like Real Women Have Curves to commentating a football season. The previous films premiered him an Audience Award and Sundance

‘Why You Crying’ was a stand-up comedy show that George Lopez launched in 2004. It became the first sitcom album to be recorded at the Terrace Theatre in Long Beach California. On July 3, 2007, George Lopez America Mexican was created and later broadcasted on HBO. The same year he starred in successful films such as Swing Vote and Hills Chihuahua. In January 2009 during The Obama Inauguration, George appeared in We Are One Inaugural Celebration at Lincoln Memorial. Not to mention from 2000 to 2009 Lopez has appeared in several series. He later managed to produce and co-create his show which Sandra Bullock; the actress was also an executive producer.

George Lopez had a weak condition that led to his kidneys failed. It was announced that he needed a new transplant since both had failed to work as usual. In 2005 his ex-wife Anna donated one kidney for his life’s sake. After few weeks he was up and running. In 2010 it was announced that George Lopez had an out of wedlock relationship. It was a huge shock for his fans and especially his wife who saved her life when he needed her the most. To make it more hurting, he continued the trend with not one but many beauties. His wife, Anna was pressurized with the situation and filed for a divorce in 2010. There were some disagreements between retirement fund and divorce settlement. But all went well in 2011.

In 2014, George Lopez was mistakenly thought that he was a housekeeper by the New York City hotel staff member. Even though it didn’t feel good to be ranked on the staff level, he has never received any apologies from the hotel management. Above all, George Lopez proved his parents wrong when he was ranked on the survivor's list. No matter how many times he fell, he will never cease to do what he does best. He is an inspiration to the global market as well as Latin community.