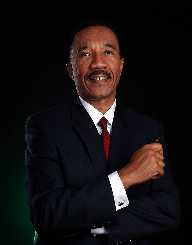 Kweisi Mfume is an African American politician and former Congressman who served a remarkable four terms in office.

He was the firstborn in the family of four siblings. Born on October 24, 1948, his parents named him Frizell Gerald Gray. He later adopted a Ghanaian name Kweisi Mfume, loosely translated as the conquering son of the kings. The Baltimore native grew up in a segregated society. He had to walk long distances to school. The neighboring schools could not accommodate him for being black. The situation was no better when his stepfather Clifton Gray left the family. As fate would have it, Mfume’s mother died when he was 16, in 1945.

As expected, the siblings were taken in by different family relations. The determination to put the family together drove him to quit school and get a job. After several years on the streets, Mfume decided that the streets have no future for him. He returned to school in 1972 at the age of 24. He graduated from high school at Community College of Baltimore and enrolled for a degree at Morgan State University. He graduated in 1976. He then adopted his new name, Kweisi Mfume. With a degree in Urban Planning, Mfume advanced his studies at John Hopkins University. He earned his Master degree in Arts in 1984.

Mfume’s political journey started while he was at the Community College of Baltimore. Having served as the chairperson of the Black Student union, Mfume used the experience to further his political ambitions. Soon after leaving Morgan University, he ran for elective of in the Baltimore City Council. With a crude campaign, he was elected to the town council in 1979.

He again ran for Congress in 1985. Mfume won the elections by a paltry three votes. This was the closest ever contest in the history of Maryland elections history. Now a Democrat in Congress, Mfume found himself in unfamiliar territory due to his uncompromising politics. He learned the art of negotiating in politics. Despite his opponents going nasty about his past history on the streets, Mfume went on to serve an impressive four consecutive terms. He won the subsequent elections with a convincing majority.

While in Congress, Mfume served in various committees of the House. He was in the Banking, Finance and Urban Affairs, Small Business, and Hunger Committees. He was an instrumental figure in the running of the Congressional Black Caucus, a society of elected black Congresspersons. He served in two positions, as treasurer and then its chairperson. His combative nature saw him disagree on many occasions with the Democratic leadership in the House.

In Baltimore, Mfume helped improve the lives of many of the underserved masses. His focus was on farming, education, healthcare, security, and social justice. These pillars drove his political life. After serving for four terms, Mfume left Congress in 1996.

He became the chairperson of the National Association for the Advancement of Colored People. To him, the position was more instrumental in helping the black community better than being in Congress. His stay as chairman heralded a new chapter for NAACP. He managed to stabilize the finances and outreach programs of the unit. The unit attained the global recognition as a Non-Governmental Organization by the UN. Mfume remained at its helm until 2004. He tried to run for Senate but was defeated in Democratic primaries in Maryland in 2006.

Mfume is a practicing Baptist. His first marriage to Linda Shields in July 1972 never lasted long. The couple divorced soon after. Currently, he is married to Tiffany McMillan. They have six children. Five are from Mfume’s earlier relationships as a teenager, while the sixth was adopted by the couple.

Kweisi Mfume is still an active voice in the fight for equality in the US. Despite his retirement from active politics, Mfume uses his board and societal memberships to advance his opinions.

Mfume is a member of professional organizations. Some of them are Baltimore Museum of Art and the Morgan State University. In the two he sits on the board memberships. He is also a board member of the Enterprise Foundation among others.

His clear vision of what he wanted to do for his society pushed him to be elected five times. Very few politicians in the US can match his years in elective office as a local representative and Congressman.