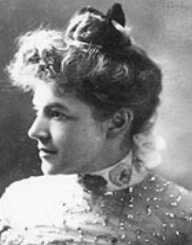 Ella Wheeler’s family lived initially in the Wisconsin town of Johnstown, and she was born there on 5th November in the year 1850. Ella came from a family of 4 children, and her parents moved on to Madison after that.

Ella Wheeler started out on poetry at a young age, and while in her teens, she already had featured in journals and periodicals. Ella's poem gave her a reputation early, and she was already in the spotlight as a result.

At the time Ella Wheeler completed her high school level of education in the state of Wisconsin, she was already well known across the state. She was at the University of Wisconsin for two years to 1868 before she dropped out to focus on her writing.

The first book written by Ella Wheeler was ‘Drops of Water,’ and this was an assortment of writings on the subject of temperance. The book hit the bookstands in the year 1872. In the following year, she published ‘Shells,’ and the book was more on a religious note.

Ella Wheeler broached the subject of love in 1875 with the book, ‘Maurine.’ It was worthy of note that the manuscript had been rejected by the first publisher she encountered. However, she refused to be daunted and got another publisher to bring it to life in 1882.

The New York Sun published her poem, Solitude in 1883 and she earned five dollars as a result. The poem made it to the book she was to release in a few years.

Ella recorded success with this book, and it was titled ‘Poems of Passion.’ The sales count for the first two years of its release hit the 60,000 mark. It was an excellent opening to give Ella a reputation as a reliable writer and poet.

The Inspiration for Solitude

The poem ‘Solitude’ was inspired by the image of a crying woman Ella met when on her way to the Wisconsin Governor’s inaugural ball. This depressed her and she could not shake off the experience. In the days that followed, as she looked at the mirror, she could see the reflection of the crying woman.

Ella set to write the opening lines for “Solitude” as she considered the image of the crying woman and what she could glean. It was a mix of fate that this profoundly touching moment for her became the masterpiece of a book.

Teaching About the Occult

Ella Wheeler was no doubt very ardent in her beliefs about the New Thought Movement and set out to explain this and what it represents. Ella majored in thoughts like laws of attraction, positive thinking, and personal power among others.

Ella Wheeler authored ‘What I Know about New Thought,’ and this boosted her popularity as she had a distribution of 50,000 copies.

Ella Wheeler also had thoughts to share about fiction, and she penned books like ‘A Woman of the World’ and ‘Mal Moulee,’ in this regard. The former was published in the years 1885, and the latter came out in 1904.

The latter book was able to hit widespread acclaim and was widely distributed and referenced.

The common attribution of Ella Wheeler Wilcox was as a poet and author of note. She is referenced more for the book, ‘Poems of Passion.’ She earned her stripes as one of the most outstanding poets of her age and era.

Ella's works enjoyed full acceptance and a large segment of society identified with her writings. She was not able to get high acclaim, but she left her imprints on the sands of time.

Ella's ideas on infinite intelligence were what spurred the New Thought Movement, and she harped on the divine nature of the human being. She highlighted the ways that people could healthily live their spiritual lives.

Ella's poems got wide acclaim but did not make it to the Oxford Book of American verse. This was however compensated for when she got listed in a different anthology called “Best Loved Poems of the American People.”

The inner thoughts of Ella Wheeler's writings projected the triumph of good over evil in the long run. She conveyed optimism through her lines so that people could assume a better day-to-day attitude as they made their way through life.

Ella's styles of writing were often on the plain side with rhyming lines that struck a popular tone.

When Ella Wheeler released the book 'New Thought Common Sense,’ reviewers noted that it was one book that was delivered in the simplicity of language. The book was such that anyone who picked it up would find easy to read.

The thrust of the book was to examine the philosophy of the religions of Asia like Buddhism and Hinduism. She brought the spiritual aspects of these religions to light in this 1908 work.

Ella Wheeler x-rayed the realization of God in daily human life and how people can attain the divinity that is already present within them. She explored the areas of difference between plain spirituality and practice of religion. She enthused that spirituality trumped religion on all fronts.

In her book, 'The Power of Right Thought,' Ella Wheeler harped on themes of Hope, Courage, Faith, and Self-Confidence. She embedded the works of Wilcox in this book and reinforced the itemized essays. She was forthright about the necessity of happiness and how it influences the quality of life.

Ella Wheeler has thrown light through her works on the themes of patience, the limitless powers of the spirit and combating previous losses in life. The vitality of real transformation in personal life is one area she also shed light on her works.

Ella Wheeler got married in the year 1884 to Robert Wilcox. Robert lived in Meriden in the state of Connecticut, and they both made their home there for a while. They also lived in New York for some years before moving on to Granite Bay, in the city of Branford in Connecticut.

They gave birth to a son, but he died not long after he was born. The couple had a number of houses in addition to cottages. In the facilities, they played host to numerous gatherings and artistic events.

Ella Wheeler lost her husband in 1916, and this was after they had lived together for 30 years. She was depressed by this loss and was made worse when Robert failed to make contact as they have both promised each other.

The renowned mystic, Max Heindel finally gave Ella the reason for the lack of contact by her husband. It is claimed that the explanation by Max was very detailed and cursory.