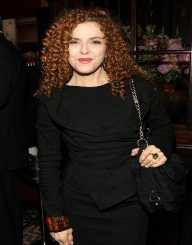 Bernadette Peters is one of the most critically acclaimed Broadway actors with Tony Awards and Drama Desk Awards and Nominations. She has performed in musicals such as, ‘Gypsy,' ‘Song and dance,' ‘Mack and Mable’ and has authored three children books such as, ‘Broadway Barks’ which ranked at #5 on The New York Times Children’s Best Sellers list.

Bernadette Peters is the youngest of three children born on February 28, 1948, to Parents Peter Lazzara and Marguerite, in Ozone Park, New York.
At the age of three and a half years Peters, appeared in a television show, ‘Juvenile Jury’ followed by, ‘Name That Tune’ and ‘The Horn and Hardart Children’s Hour’ at the age of five.

Bernadette Peters received her Actors Equity Card at the age of nine, and made professional stage debut in, ‘This is Google.' In 1958, she appeared in a vignette titled, ‘Miracle in the Orphanage’ and ‘The Christmas Tree’ in December.

At the age of ten, she made her first appearance on a New York Stage in a revival of ‘The Most Happy Fell’s Tessie. During her teenage years, she joined the Quanatno’s School for Young Professionals and appeared as one of ‘Hollywood Blondes’ in a Gypsy second national tour.

In 1962, Bernadette Peters played, ‘Summer Stock’ as Dainty June and recorded her first single. Later in 1964, she performed in ‘The Sound of Music’ as Liesl and in ‘Riverwind’ as Jenny.
After her graduation from high school, she appeared in the musical, ‘The Penny Friend’ in 1996, ‘Curley McDimple’ and ‘The Girl in the Freudian Slip’ in 1967.

Also, she made her Broadway debut in, ‘Johnny No-Trump’ followed by plays in ‘George M!’ and ‘Dames at Sea’ in 1968.Peter’s performed in her next Broadway ‘La Strada’ in 1969 and ‘On the Town’ in 1971. Later in 1964, she played in ‘Mack and Mabel’ as Mabel Normand and moved to Los Angeles to concentrate on television and film work.

In 2003, Peters performed in a film titled, ‘It Ran in the Family’ with three generations of Kirk Douglas family as Michael Douglas’s wife and performed the role of Mama Rose in, ‘Gypsy.'Peters sang four songs alongside Mandy Patinkin, accompanying children’s picture book, ‘Dewy Doo-it Helped Owlie Fly Again’ in 2005.

On May 2006, she appeared in a movie, ‘Come leformiche’ (Wine and Kisses) released on 2007 in Italy. During the same period, she read Sondheim Weidman musical, ‘Bounce’ and participated in a charity reading of the play, ‘Love Letters’ alongside John Dossett.

By 2008, Bernadette Peters released a children’s book about a scrappy dog titled, ‘Broadway Barks’ which reached #5 on New York Times Children’s Best Sellers. Her second book followed release in 2010, entitled, ‘Stella is a Star’ and her third book, ‘Stella and Charlie Friends Forever’ in 2015.
After her six-year absence on Broadway Stage, Peters starred as Desiree Armfeldt in ‘A Little Night Music’ from July 2010 to January 2011.During the same period, she played the role of Sally Durant Plummer in a musical, ‘Follies’ Peters also starred in ‘Coming Up Roses’ released in 2012.

In 2013, Bernadette Peters starred in, ‘A Bed and a Chair: A New York Love Affair’ with the collaboration of Emcrores! And Jazz. She also sang, ‘Broadway Baby,' ‘With So Little to Be Sure Of,' ‘I Remember,'and ‘Isn’t He Something?’ among others.
Peters is set to replace Bette Midler in a revival of ‘Hello Dolly!’ scheduled to begin on January 20, 2018.

Bernadette Peters dated Steve Martin for four years from 1977.On July 20, 1996, she married Michael Wittenberg. Unfortunately, Michael died in a helicopter crash while on a business trip on September 26, 2005.

In 1981, she won a Golden Globe Award for Best Motion Picture Actress in a Comedy or Musical.For her music careers, Bernadette received three Grammy Awards Nominations in years, 1997, 1998 and 2003.In 2011, she won a Drama Desk Award for her Outstanding Actress role in a musical.