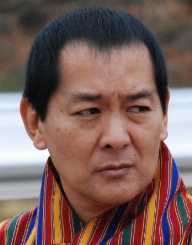 Jigme Singye Wangchuck was born on November 11, 1955, in Thimphu, at the Dechencholing Palace in Bhutan to Jigme Dorji Wangchuck and AshiK Esang Choden Wangchuck. The young prince received education at several western and traditional learning institutions. He began his studied at the Dechencholing Palace when he was six years old, and afterward went to study at the St. Joseph’s College in India. He also attended the Heatherdown Prep School in England, which he graduated in 1964. He later attended the UgyenWangchuck Academy at SatshamChoten in Paro.

During his teenage years, Wangchuck spent a lot of his time together with his father, who worked to prepare him for leadership. To prepare him for his future status as a monarch, his father appointed him as the first Chairperson of the Planning Commission in 1971, for his five-year plan. When Wangchuck was sixteen years old, his father suddenly died, and he became the successor to the throne.

Accession To The Throne

As the new king, Wangchuck continued the work his father had started on the reform of developmental policies. He mostly focused on infrastructure, education and healthcare developments. He also worked to implement steps to preserve the cultural heritage and environment of Bhutan. During the 1970s, Wangchuck began to intensively work on projects, like cash crops cultivation, to enhance the economic status of the poor. His main focus became the planned development of the country.

Wangchuck greatly focused on infrastructural developments. By the end of his reign in 2006, Bhutan’s road infrastructure had grown from 1,332 km of roads to 4, 544 km. The country also experienced growth in technological achievements. In 1974, there were only 480 telephone connections, but in 2006- 31, 526.

Wangchuck was passionate about promoting educational development and worked on promoting educational and training facilities. His work benefited many of young students, and the count of students enrolling in schools rose dramatically. His free educational policy reached enrollments of close to 90% in 2006. His work on health services allowed the country to have safe drinking water and provide better nutrition. With his efforts, the average life expectancy rose to 66 years. The country also saw a dramatic decrease in infant and maternal mortality rates due to the improved medical facilities.

Wangchuck was a very loved and respected king. Over the course of his 34-year reign, the country experienced major developments in many areas. During the 1990s, Wangchuck began working towards Bhutan’s democracy. The national GDP in 1985 was Nu 2.4 billion, but in 2006, it was already Nu 36.9 billion.

Wangchuck built a strong relationship with many other countries, including Nepal, Japan, Bangladesh, Thailand, Canada and many European countries. He maintained a very close relationship with India, which was the countries, main developmental partner. During the 1990s, he instituted Constitution of Bhutan and relinquished absolute authority. Wangchuck resigned as the king in 2006, in favor of his son Jigme Khesar Namgyel Wangchuck.