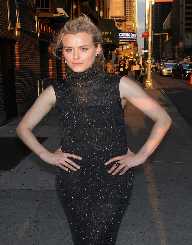 An American native, Taylor Schilling rose to fame as an incredible thespian, all thanks to her charming roles. She is best known for acting as Piper Chapman in one of the Netflix series: Orange is The New Black. She also took part in a romantic movie; The Lucky One as Beth Green. Before fame, Taylor was selected to play as Nurse Veronica Callahan in a drama series called Mercy. From her childhood years, Taylor knew what she wanted to become. Her calling came in middle school where she appeared in a production film titled Fiddler on the Roof. Let’s see what Schilling has in store for us.

Behind a charming and innocent face, lies an array of a peaceful ambiance that is loved by all. It isn’t by chance that Taylor Schilling was born as a peacemaker. Cooperative and patience are her order of the day. She lovingly works well with her colleagues, all thanks to her diplomatic nature. She possesses an artistic soul that gives her a chance to work on her strengths and weaknesses. However, she also employs a sensitive kind of demeanor in all of her activities. She tends to use this trait to overcome her fears and extreme feelings. Above all, she always carries a friendly and domestic kind of personality. When it comes to her recreational activities, Taylor loves to get involved in an artistic field; she enjoys gardening, music, acting among others. Talking about her trending outfits, WOW! She has an excellent taste in color and design. Nevertheless, Schilling concentrates more on comfort than social status.

On 27th July 1984, Taylor Schilling was born in Boston, Massachusetts, in the US to Patricia Shilling and Robert J. Schilling. Her father served as a prosecutor while her mother worked as the university administrator. At her tender age, her parents divorced which led her to adopt a new environment. She was devastated to move from one parent house to the next. She had to act like everything was okay but the little child’s heart was becoming weak and rogue as days passed. In all, she embraced neighborhood criticisms just to save her dreams. As a little girl, Taylor loved to run to and fro in a grassy yard. She also liked to impersonate different characters such as Judi Dench. Not to mention she used to direct her brother how to wear a perfect cosplay. In 2002 Taylor graduated from Fordham University with a Bachelor of Arts in the acting field. She went to NY to further her career where he joined New York University but dropped in the middle.

Before her graduation from Fordham University, Taylor Schilling took a step of faith where she appeared in a small drama: Dark Matter in 2007.After graduation, Taylor moved to Manhattan where she served as a nursemaid. It was quite tricky for her, but she had to manage for her upkeep. Taylor continued to search for hope in several theaters and plays. Her prayers were answered after two years, where she landed a role in a television drama. Unfortunately, it wasn’t aired for long, but she received positive acclaims. This is what led to another part of a romantic drama called The Lucky One.

Taylor struggled for some time, and it was in the same process that she landed a leading role in a comedy series. Orange is The New Black sitcom series became the talk of the town. She managed to reach her target audience. Success and fame cemented her life. The media and public at large loved Taylor’s role. In fact, in one weeks’ time, it generated more acclaims than the House of Cards Netflix series.

In 2015 Schilling made her comeback with a mysterious comedy film called The Overnight. The film was directed and written by Patrick Brice. She was quite uneasy to take a role that required her wear ‘minimum’ clothes. Overall, it was a success in the end. With lots of things going through her mind and career, she took the world by surprise when she appeared in Game of Thrones in 2014.

Taylor Schilling is not yet married and isn’t planning to do so soon. Another thing is that she isn’t yet ready for close commitments. When it comes to children, yes she loves them, but she isn’t willing to be called a mom yet. All said, at least not yet for her! From 2014 to 2016 Taylor has received several awards including Screen Actors Guild Award, Satellite Award, and Glamour Award.