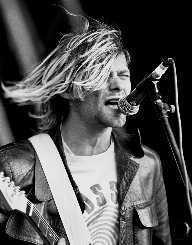 Born on February 20 1967, Kurt Cobain grew in Aberdeen, a small town in Washington. He started playing drums in his school days. Nobody knew he will become such a famous musician and superstar. Kurt Cobain, the great song writer, singer and guitarist came up with his first single "Love Buzz" in 1988. He formed the band Nirvana that rocked the world of music. Nirvana came up with their first album in 1989 called Bleach. And they went on to win the hearts of millions of fans worldwide with their next albums like Nevermind, In Utero.

Kurt married in 1992 to Courtney Love, the lead from the band Hole. The grunge band "Nirvana" was doing well and reached the top of the rock world, till 1994. On 05 April 1994 decided to end his life in the guest house behind his Lake Washington Boulevard Home.

Kurt Cobain started showing talents from an early age, as he used to draw his favorite cartoon characters like Donald Duck, a creature from the Black Lagoon, on the walls of his bedroom. According to his aunt Mari, he starting singing at the age of 2 and learned piano a little and began writing his songs when he was four years old. His favorite songs were, The Beatles' "Hey Jude," Arlo Guthrie's "Motorcycle Song",  Terry Jacks' "Seasons in the Sun", etc.

Kurt, the great musician was a victim of sadness as his parents' marriage was really messed up. Soon after his parents divorced, sad and lonely, the young Kurt wrote lines on his wall "I hate Mom, I hate Dad, Dad hates Mom, Mom hates Dad, it simply makes you want to be sad". Kurt was always interested in music and arts class in his school and played the drums. But could not find anyone there to start making music with.

Despite of the challenges, and depressing events, Kurt Cobain found his life in music and struggled to come up and auditioned to be in the Melvins, but was rejected. He met Krist Novoselic at the Melvins' practice space, who was also a musician and a great follower of punk rock. Cobain tried to convince Novoselic to join him and form a band together, for which he presented him copies of his work from his previous band called Fecal Matter. After a long time Novoselic agreed and joined him.

Kurt and Novoselic formed a band and named it "Nirvana" after a Buddhist concept (Kurt was fond of Buddhism and Jainism). In the beginning Kurt and Novoselic played together for years and changed a number of drummers. And finally, they chose Chad Channing and recorded the album Bleach, released on Sub Pop Records on June 15, 1989. The album was recorded in Seattle, Washington. Later in 1992 it was rereleased by Geffen Records and ranked 89 on the Billboard 200, and peaked at number 33 on the UK Albums Chart and 34 on the Australian albums chart. More than 1.9 million albums were sold.

As Kurt Cobain the lead of the band wasn't satisfied with Channing's style, he chose Grohl as the new drummer. With Grohl, the group found their most significant success through their 1991 major-label debut, Nevermind. Over 30 million copies were sold worldwide.

Including his first "Love Buzz", many other singles like Lithium, Come As You Are, etc very famous. By January 1992 "Smells like teen spirit" replaced Michael Jackson's album Dangerous at number one on the US Billboard 200. Once this fax was sent by Metallica: “We really dig Nirvana. Nevermind is the best album of the year. Let’s get together soon, Metallica. PS, Lars hates the band.”

Kurt Cobain was a great Musician but in personal life he was a very disturbed and troubled person who was fighting depression throughout his life. Kurt Cobain started using heroin since he was only 13, and by 1990 he was a severe addict. He was suffering from chronic bronchitis and a stomach issue from a long time. In 1989 Tracy Marander, his girlfriend gave up on his drug addiction and broke up with him.

In 1990 Kurt met Courtney Love (lead of the Hole band) at a night club, and their relationship advanced to marriage in February 1992. Their daughter Frances Bean Cobain was born August 18, 1992. Due to the parents' drug addiction, the child was removed from their custody and given back only after many negotiations.

One of the Super-8 movies that Kurt used to enjoy making contains a scene in which Cobain commits suicide. With the Intervention of Courtney, his wife, finally he went to Exodus Recovery Center on March 30, 1994, under a detox program. Kurt Cobain flew the same night from the Rehabilitation Center.

On April 8, 1994, his body was found by an electrician, in the guest house at the back of his Lake Washington Boulevard Home. By the reports, it was found that Kurt Cobain decided to end his life and committed suicide on 5 April 1994, by a 20 gauge shotgun.

Kurt wrote a letter to his childhood imaginary friend Boddah, where he mentioned that he had lost all the excitement of writing and making music. Earlier, on March 4, 1994, he tried to suicide by drug overdose but escaped death at that time.

Kurt Cobain was one of the greatest musicians of all times, who fought his hard childhood times, which led him to a life of alcohol and drug addicts.