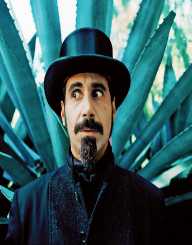 Serj Tankian was born on August 21st, 1967. His place of birth was in Beirut, Lebanon. Tankian is a famous musician known for being the lead singer of System of a Down, a rock band. The rock band has had a positive impact on his career path as it earned a Grammy Award. His fame is also as a result of being identified as the founder of the music label called Serjical Strike Records.

Serj Tankian was born on August 21st, in 1967. His parents are of Armenian descent. When Tankian was aged seven years, he migrated with his parents to Los Angeles, California. During this period, he schooled at Rose and Alex Pilibos Armenian School. This was that same school that two of his bandmates, Shavo Odadjian and Daron Malakian also attended. Later on in his education, he was fortunate enough to enroll with California State University, Northridge, where he pursued his higher education. In addition to this, his dream of being a famous musician began to take its course. He started writing songs and playing instruments, something that would, later on, define his future career path.

Before Tankian gained popularity while working with System of a Down, the band that he was associated with was called Soil. At this time, Tankian major contribution was with his exceptional skills on the keyboard and vocals. His classmate, Daron Malakian was also a member of this band and that he played the lead guitar. Other members were Dave Hakopyan and Domingo Laranio who played bass and drums respectively. At first, Shavo Odadjian got involved by being the band manager. This changed later on as he went to become the rhythm guitarist. The band did not perform well. This had a negative impact on the perception that Hakopyan and Laranio had in their minds. Ultimately, they thought that the band would not succeed and they left. Unfortunately, this was the end of Soil band.

Shortly after, the former schoolmates Tankian, Malakian, and Odadjian came again together to form another band. The newly created band was called System of a Down. They coined this name from one of the poems that Malakian had written called Victims of a Down. With the band up and running, Tankian called back their former drummer they had been working within Soil band. His name was Ontronik Khachaturian. After playing the drums for a short while, Khachaturian broke his arm. John Dolmayan came in as his immediate replacement. It did not take time before the band’s music impressed many and they had a large number of fans attending the tours they were making in Southern California.

With System of a Down trying its best to gain recognition, with time, their dreams came true after releasing their five studio albums. Three of these albums were ranked as number one on Billboard 200. In addition to this recognition, the band went ahead and became a four-time Grammy Award nominee. In 2006, the band was bestowed with Best Hard Rock Performance award.

Tankian has also been successful in his solo career. His first record to be released as a solo artist made him famous. This record was called Elect the Dead. He later took a tour of the record in 2007.

Tankian is a human rights activist. His fame has risen from the views that he has on social justice and genocide attacks. In fact, his activism views are portrayed from the style of music that he takes.