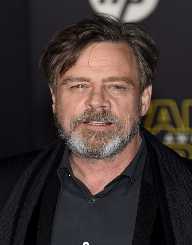 American actor Mark Hamill was born on the 25 September 1951 in Oakland, California. His parents were William Hamill and Suzanne Johnson.

One of his first roles was on The Bill Cosby Show (1969). He also appeared in the soap opera General Hospital and The Texas Wheelers (1974). Hamill then auditioned for the part of Luke Skywalker in Star Wars and won the part.

Apart from Star Wars and the sequels he appeared in Corvette Summer (1978), The Big Red One (1980) and Kingsman: The Secret Service (2014). He has done a lot of voice acting including the voice of the Joker in the Batman films. In The Clone Wars (2014) he did the voice of Sith Lord Darth Bane.

Mark Hamill appeared in Star Wars: The Force Awakens in 2015.

Mark Hamill received a Daytime Emmy Award for his voice acting as Sith Lord Darth Bane in the final episode of The Clone Wars, an animated series.

In 1982 he won a Best Actor Saturn Award for The Empire Strikes Back and in 1984 he won the same award for Return of Jedi.