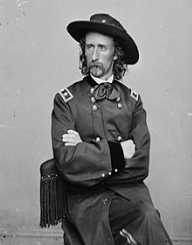 George Custer was a US military commander who rose to fame during the Civil War, and the expansion west through the Native Indian territories.

George Armstrong Custer was born on December 5, 1839, in Ohio. He grew up in Michigan He was a descendant of German immigrants from Rhine Valley. He studied in Michigan and graduated to teach in a local school. He secured admission to the Military Academy at the age of 18 years.

He started his military education in 1857. Custer was a bright and intelligent student. He despised the military discipline and never embraced it. He was punished several times for insubordination. Custer survived expulsion from the academy on numerous occasions. At the end of the training, Custer graduated last in the 1861 graduating class. He was nicknamed the goat for being last.

He was headed for a demerit from the academy and dismissal. Custer was saved by the star of the American civil war. The Union army was short of army officers to lead in the fight. Custer was commissioned as an officer of the US army. He was given the rank of Second Lieutenant of the army and deployed in the capital Washington D.C.

Custer fought his first battle in July 1861. Despite his low grades at the military academy, Custer proved a tactician on the battlefield. He impressed his superiors and redeployed after the battle. He was assigned under General George McClellan in the Battle of Bull Run. Under General McClellan, Custer fought another battle in 1862 in the Peninsula Campaign.

He became reputed for his bravery and leadership skills in the unit. Custer loved the limelight. He exhibited the indiscipline of his academy days again on the battlefield. He posed and gave out interviews to the cameras recording the military engagements. In 1863, he was promoted to the rank of Brigadier General of the Volunteer Corps in the US army. He became the commander of the Michigan Brigade. At the age of 23, he became the youngest brigade commander in the army. Custer wore the new rank with pride and attracted more cameras to him.

In the Battle of Gettysburg, Brigadier Custer engaged Confederate General Stuart in a fight. He led his forces in defeating the Confederate forces and captured the fleeing Confederate soldiers. He registered a high number of fatal casualties in the win. Custer lost 250 Union soldiers during the battle. Custer fought alongside the experienced Major General Philip Sheridan in 1864. In April 1865, he led his brigade in the Battle of Appomattox Court House. The decisive victory over the Confederates ended the civil war.

When the Confederate Commander Lee formally surrendered, General Sheridan gave the surrendering table to Custer’s wife. It was a souvenir to his service in the army. Custer was promoted to Major General of the Volunteer Corps. Custer fought bruising battles and lost many soldiers in the war. He survived all these battles without a scratch. His fellow soldiers termed his survival as the Custer Luck.

Custer was commissioned to command a regiment to expand to the west. He became the Lieutenant Colonel of the 7th Calvary. He went to battle in 1866 against the Native Indian tribes in Kansas. He was accused of several defeats during the campaign. He was court-martialed for abandoning his command to visit his wife. He was sentenced to a year without pay. In 1868, Custer was back to fight the Native tribes. In November 1868, he registered the first defeat against the Natives in Oklahoma. The war ended with a treaty of Fort Laramie between the US and the Natives in 1868.

In 1874, gold was discovered in South Dakota and Wyoming, which was Sioux Indian territory. The US government decided to violate the treaty and relocate the Natives. The Natives resisted US President Ulysses Grant's order. Custer was removed from his command and resisted to fight the Natives.

On May 18, 1876, the US army began its campaign to evict the Natives from their lands. The Natives organized a meeting under the Lakota Chief Sitting Bull. The chief called a joint meeting of the Lakota, Cheyenne and Arapaho Natives in Montana. 2,000 men attended the meeting at the Little Bighorn River camp.

On June 25, 1876, Custer reached the Natives camp at the Bighorn River. He divided his Calvary into three units. He led his unit to attack the Natives before the other units were in place. He was overwhelmed by the Native warriors. Custer and his 210 men were killed in the battle. Unconfirmed reports emerged that the two other unit commanders resigned not to aid Custer in his attack. They retreated in the sight of the Native warriors. The US army later brutally pacified the resistance of the Native Indians.

Custer married Elizabeth Bacon in December 1862. The couple never had any children.

Custer died in battle aged 36 years. His death and the emerging controversy surrounding his death elevated him to a military martyr figure. Several Hollywood movies have been produced in honor of the life and battles of the fallen hero of the American western expansion.