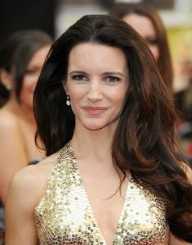 Kristin Davis is an American Actress widely known for her role as “Charlotte York” in Sex and the City, an HBO series.

She has also made theatre appearances in The Best Man and Fatal Attraction.

Kristin Davis was born as Kristin Landen Davis, on February 23, 1965. Her birthplace is Boulder, Colorado.

Her parents separated soon after her birth, and she had three elder sisters when her mother married Keith Davis, a psychology professor.

From the early age of nine, she dreamt of becoming an actress and had a theatre role in Snow White & the Seven Dwarfs.

Kristin Davis graduated from A.C. Flora High School in 1983. She then attended the Rutgers University in New Jersey.

Before she became a full-time actor, Davis ran a yoga class along with a friend. Struggling to make a mark, she also waited tables early in her career.

Kristin Davis made a few appearances at the soap opera General Hospital. Along with other small roles, she appeared in a few commercials.

In 1995, she got her first major break. She was cast as Brooke Armstrong in Melrose Palace, a night-time series. Her character had a negative shade. She received small roles in Friends and Seinfeld.

Before Sex and the City, Kristin Davis appeared in several television films. In 2005, she voiced Max’s Mom in the movie The Adventures of Sharkboy and Lavagirl. She also starred in Soccer Moms.

Her most known films are Sex and the City and its sequel, where she plays Charlotte York, a romantic art dealer.

Following this, she acted in Couples Retreat in 2009. Most of her films are comedy-centric, and her performances have received mixed reviews.

In 2012, Davis was cast in the play The Best Man. Two years later, she played Beth Gallagher in the game Fatal Attraction. ­

She is an ambassador for Oxfam, an organization working to alleviate global poverty. She has visited Mozambique, Uganda & South Africa to understand gender inequality & poverty issues better.

She has supported the United Nations High Commissioner for Refugees and filmed a fundraiser for their support.

Along with her co-stars in Sex and the City, Kristin Davis won the Screen Actors Guild Awards for Outstanding Performance by an Ensemble in a Comedy twice.

Kristin Davis has had no marriages although she has dated many men. She has a daughter, Gemma Rose, whom she adopted in 2011.

Her home is in Los Angeles, California. In her teens, Davis became an alcoholic, due to her family culture of embracing alcohol as part of life. She has spent some time in rehab and is recovering from this habit.

Kristin Davis likes to listen to music from a variety of genres including Dave Matthews and some of Mozart’s classical pieces.

Her other favorite pastimes include baking and spinning. She also enjoys running and hiking.