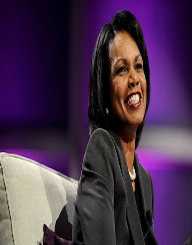 American politician Condoleezza Rice was born on the 14 November 1954 in Birmingham, Alabama. Her father was a college principal, pastor and sporting enthusiast and her mother a music teacher. Rice was an only child.

Condoleezza Rice was appointed a political science professor at Stanford University in 1981. In 1983 she became the first African American and the first woman to serve as provost of Stanford University (1983-1989). She was also the Chief Budget and Academic officer at the university. During the 1980s she also worked in Washington, D.C. as an international affairs fellow. In 1989, at the time when the Soviet Union was being dissolved, Rice was appointed Director of Soviet and East European Affairs on the National Security Council as well as a special assistant to the President.

She also was on the Federal Committee on Gender-Integrated Training In the Military (1997).

Condoleezza Rice is the Denning Professor in Global Business and the Economy at the Stanford Graduate School of Business. She is also the Thomas and Barbara Stephenson Senior Fellow on Public Policy at the Hoover Institution and a professor of Political Science at Stanford University.

International strategic consulting firm RiceHadleyGates, LLC was formed in 2009 and Rice is a founding partner.

As an author Rice has published some books including an account of her time in Washington, No Higher Honor: A Memoir of My Years in Washington and a biography of her family: Extraordinary, Ordinary People: A Memoir of Family.

Rice was appointed a Fellow of the American Academy of Arts and Sciences. She also holds numerous honorary doctorates.

Although engaged to American football player Rick Upchurch in the 1970s, Rice has chosen to remain unmarried and has no children.

Condoleezza Rice was brought up in the Presbyterian faith.