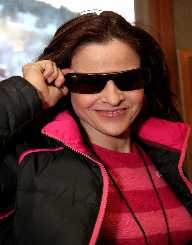 Alexandra Elizabeth Sheedy was born on 13th June 1962, to John and Charlotte Sheedy. Her father is an advertising executive in Manhattan, and her mother is a writer and press agent. Sheedy’s mother is also known for her involvement in civil rights and women’s movements. Her parents divorced in 1971 when she was nine years old.

Alexandra  Sheedy was born in New York City, and is one of three children. She has a brother, Patrick, and a sister, Meghan.

Alexandra  Sheedy graduated from Columbia Grammar and Preparatory School in 1980.

At the age of just six, Alexandra  Sheedy was dancing with the American Ballet Theatre. Dancing was her first love, but she soon found acting, and eventually gave up dance to concentrate on her acting.

Alexandra  Sheed's career kicked off when she was 12 years old. It wasn’t dancing or acting, but writing that got her first noticed. Her novel, She Was Nice to Mice, was published by McGraw-Hill. The book became a best seller.

After she graduated from school, Alexandra  Sheedy began acting. She started in television with some roles in television movies, and appeared in several episodes of Hill Street Blues. Her movie break came in 1983 when she debuted in Bad Boys with Sean Penn.

Alexandra  Sheedy had several acting roles in movies throughout the 1980s which was when she was in the prime of her acting career.

Between 1983 and 2016 Alexandra  Sheedy has acted in over 40 movies, but quite a few of the roles were only small or cameo parts. She was also in about 40 productions on television, both movies and television series, including Hill Street Blues, and CSI: Crime Scene Investigation.

As well as her book from when she was a youngster, Alexandra Sheedy released a book of poetry in 1991, called Yesterday I Saw the Sun.

Apart from her major movie releases during the 1980s, Alexandra  Sheedy was in an independent movie called High Art, which was released in 1998. She was critically acclaimed for her role in the movie, and also won awards.

Alexandra  Sheedy is best known for the movies, The Breakfast Club, and St. Elmo’s Fire, which were both released in 1985. She acted with several other actors her age, including Emilio Estevez, Rob Lowe, Demi Moore, and several others. The group became known as the “The Brat Pack”.

During her acting years, Alexandra  Sheedy was nominated for 12 awards, and won five of them. Four of them were for her role in High Art and included awards from the Los Angeles Film Critics Association, Independent Spirit Awards, and the National Society of Film Critics.

Alexandra  Sheedy married David Lansbury, a fellow actor, in April, 1992. They had a daughter, Rebecca, but the couple divorced in 2008.

Alexandra  Sheedy has also become known as a supporter for Farm Sanctuary, a charity for farm animals that have been abused, particularly from ‘factory’ farms. The animals are given shelter and cared for. Sheedy has also declared herself a vegetarian in support of animals.