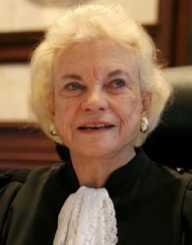 The first woman to serve on the American Supreme Court bench Sandra Day O’Connor was born Sandra Day on the 26 March 1930 in El Paso, Texas. Her parents were Harry Day and Ada Mae. She was raised on a ranch along with her two siblings: brother Alan and sister Ann.

Sandra Day O’Connor graduated from Austin High School, El Paso (1946) and then enrolled at Standford University where she obtained a BA (1950), followed by a law degree (1952).

Initially, Sandra Day O’Connor found it hard to find work in a law firm because she was a female. She eventually became a district attorney in San Mateo County, California. By that stage, she was married to John Jay O’Connor III who was the U.S. Army Judge Advocate General Corps. The couple moved to Germany, and during that time Day O’Connor worked as a civil attorney for the U.S. Army (1954-1957). When the couple returned home, Day O’Connor entered into private practice in Maryville Arizona. She became an assistant attorney general in Arizona (1965-1969).

Sandra Day O’Connor entered politics in 1969 when she was elected to the Arizona Senate on a Republican ticket. She held the seat until 1974 and during that time she made history when she became the first woman to become the majority leader.

In 1975, Sandra Day O’Connor was appointed a Superior Court Judge in Maricopa County, and she was in this position until 1979. She was then made an Appeals Court judge in Phoenix, Arizona. When Justice Potter Steward retired from the U.S. Supreme Court bench in 1981, President Ronald Reagon, put forward Day O’Connor as his nominee.

She was unanimously voted for by the U.S. Senate (99-0) on the 21 September 1981, became the first female to sit on the bench of the U.S. Supreme Court. On the 25 September 1981, Day O’Connor took the oath of office. She spent 25 years on the bench working for standards for religious disputes, death penalty appeals, and abortion. Day O’Connor retired in January 2006 and was replaced by Samuel Alito.

Sandra Day O’Connor was presented with the Presidential Medal of Freedom by President Barack Obama on the 12 August 2009.

Sandra Day O’Connor married John Jay O’Connor III in 1952. The couple had three sons: Scot (b.1958), Brian (b.1960) and Jay (b.1962). Her husband, a prominent lawyer in Arizona, died of Alzheimer’s Disease in 2009. Her decision to retire from the bench was to care for her husband. The Atlantic reported in October 2018 that Day O’Connor had been diagnosed with Alzheimer’s Disease. Her mother and sister had both been affected by the disease.