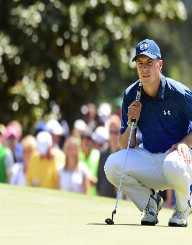 Jordan Alexander Spieth was born 27th July 1993, to Shawn and Mary Christine Spieth. He was born in Dallas, Texas, United States. He has two siblings, a brother, Steven, and a younger sister, Ellie. Jordan Spieth attended St. Monica Catholic School as a youngster, and in 2011 graduated from Jesuit College Preparatory School.

He studied at the University of Texas, and whilst in his sophomore year at college, Jordan Spieth became a professional golfer.

As a talented amateur, Jordan Spieth won the U.S. Junior Amateur, in both 2009 and 2011. In July 2011, Jordan Spieth was ranked top of the AJGA Golf Rankings, which is where the best junior golfers in the world are promoted. In 2010, Jordan Spieth became the sixth-youngest player to make the cut in a PGA Tour event, the HP Byron Nelson Championship. He also participated in the 2011 event.

Jordan Spieth earned a place in the U.S. Open in 2012. After his performance in the Open, Jordan Spieth topped the World Amateur Golf Ranking list, and later that year, he turned professional. He was sponsored by Under Armour in January, and then with BioSteel Sports Supplements in March. Jordan Spieth entered several tournaments and cut most of them, with a top ten finish in April at the RBC Heritage.

Jordan Spieth won the John Deere Classic that same year and made the playoff. Due to his performance, Spieth was given full status as a PGA Tour member. This enabled him to enter the FedEx Cup, as well as the three major tournaments that followed – the 2013 Open Championship, the PGA Championship, and the 2014 Masters.

Jordan Spieth continued to compete during 2013, and by the end of the season he had a ranking of 10th on the PGA Tour money list, and he placed 22nd in the official world golf rankings. He continued his success into 2014 and moved into the top 10 of the world rankings. Continuing to compete, he won the Emirates Australian Open in November, then went on to win the Hero World Challenge in Florida. In 2015, Jordan Spieth, continuing to win tournaments, moved to his highest rank of fourth in the world golf rankings. He won the U.S. Open in June. Only six players have won both the U.S. Open and the Masters in the same year, and Spieth is now one of them.

Jordan Spieth moved into the number one ranked place in the world golf rankings for a three-week period during August and September 2015. 2016 saw Jordan Spieth continue in the winners’ circle, taking out several tournament wins. He was offered a spot in the U.S. golf team to participate in the 2016 Summer Olympics, but he declined the invitation.

Jordan Spieth started 2017 with three top ten placings in tournaments, before he won his first of the year. This year has been up and down performance-wise, with at least two wins, but also missing the cut for several tournaments. Over his few short years as a professional golfer, Jordan Spieth has had 14 wins. Eleven of those were on the PGA Tour, and two of them were on the PGA Tour of Australasia.