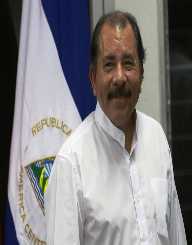 Jose Daniel Ortega Saavedra was born on November 11, 1945, in La Libertad, Chontales, Nicaragua. His parents were active in opposing the regime of Anastasio Somoza Debayle. His mother was even imprisoned for sending “love letters” with encoded political messages. His two brothers both died during combat in 1978. He also had a sister, who died.

Daniel Ortega was influenced by his parent’s and started being politically active at a young age. When he was 15 years old, he was arrested for his activities. He then joined the underground Sandinista National Liberation Front (FSLN). The group robbed a branch of Bank of America in 1967, and Ortega was imprisoned until 1974. He and other Sandinista prisoners were released in exchange for Somocista hostages.

During his imprisonment time, Ortega wrote poems. He was severely tortured in prison, and after being released, he was exiled to Cuba, where he received guerrilla training. He later returned to Nicaragua in secrecy. In 1979, Ortega married Rosario Murillo and moved to Costa Rica with her and her three children from the previous marriage. He remarried Murillo in 2005 so that the Roman Catholic Church would recognize the marriage. The couple has eight children.

In 1979, Somoza was overthrown by the FSLN. Daniel Ortega then became one of the members of the Junta of National Reconstruction, dominated by the FSLN. Two years later, Ortega became the coordinator of the Junta, and as the only member of FSLN National Directorate in the Junta, he was the effective leader of the country. The social reform included redistributing 5 million acres of land to 100,000 families, a literacy drive was launched, and several health system improvements were carried out, which led to the elimination of polio and reduced other diseases.

Ortega led a centrally planned economy and nationalization policy. Any opposition to his ruling was taken very hard, as an example, the Sandinista army killed 7 Miskito Indians for opposing the regime. The native population was displaced, moving around 10,000 natives by 1982. Many took refuge in Honduras, and around 14,000 Indians were imprisoned in Nicaragua.

In 1981, President Ronald Reagan accused FSLN of joining forces with Soviet-backed Cuba. U.S. Central Intelligence Agency was authorized to arm and train rebels- collectively known as Contras. This also led to one of the biggest political scandals in US history. Soon, Nicaragua was faced with a civil war which led to the death of 30,000 civilians. In 1987, Ortega won the general election for the presidency with a 67% vote. The election was declared fair and was carried out with total integrity.

In 1990, Daniel Ortega ran for the presidency the second time but lost to his opponent Violeta Barrios de Chamorro. She was supported by the United States and anti-Sandinista alliance- the National Opposition Union. Ortega ran for re-election in 1996 and 2001 but lost both times. His major falling point was allegations of corruption.

During his time in the opposition, Ortega changed his Marxist stance in favor of democratic socialism. He embraced a variety of socially conservative policies and became more public about his Roman Catholic faith. He was a major part in creating a strategic pact between FSLN and Constitutional Liberal Party. However, the alliance between two leading parties distributed the power between them, preventing the rise of other parties.

In 2006, Daniel Ortega once again ran for the presidency and won with a 38% of the vote. The FSLN won 38 seats in the congressional election that year, becoming the largest representation in the parliament.

Since his election in 2006, Daniel Ortega has implemented several policies to improve healthcare, education and social security. He also works towards combating hunger. Ortega implemented several enhancements of labor rights and introduced low-interest loans and training for female entrepreneurs in rural areas. His policies have majorly helped to reduce poverty and inequality in Nicaragua.

In 2008, the Nicaraguan Supreme Court disqualified the MRS and Conservative Party from participation in municipal elections, which was followed by a lot of national and international criticism. International observers were not allowed to observe the election, and the official results were that the Sandinista candidates won 94 of 146 municipal mayoralties. The opposition claimed that ballots were destroyed and that the tallies from many polling places were altered. These allegations led to suspension of $70 million in aid from European Union and $64 million from the United States.

When recession occurred in late 2000, Daniel Ortega began criticized capitalism. He announced in an interview that he would like to change the constitution, which could allow him to run for the presidency again. The Supreme Court of Justice of Nicaragua declared provisions of the constitution, allowing Ortega to run for re-election in 2011, which he won.

In 2014, the National Assembly approved changes in the constitution, abolishing term limits for the presidency, and allowing the president to run for an unlimited number of five-year terms. Ortega’s family also owns three of nine TV channels in Nicaragua and controls one of the public channels. As of 2016, Daniel Ortega is in the line for next presidential term.