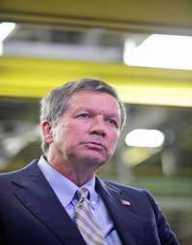 John Kasich was born on the 13th day of May in the year 1952 at McKees Rocks in the U.S state of Pennsylvania. His parents were employees of the U.S postal services and all his formative years were spent in his place of nativity. His parent’s also had two other children who were a boy and a girl. His father put in a total of 29 years delivering mails.
John Kasich's early aspiration when growing up was to become either the U.S president or a Catholic priest. In his fourth grade, John was already serving as one for the altar boys his family’s Mother of Sorrows Catholic Church. Years later, he opined that he loved girls too much to settle for the priesthood, so he opted to be in politics.

Describing his modest upbringing, John described the house where he was raised as a two-story building that was on his father’s work route.John says of his parents that they were diligent folks who earned a livelihood and were considerate. Though they never had so much money, they had enough for what they needed.

John Kasich majored in political science while attending Ohio State University, John's sights were set on politics and while yet a freshman, he bore a message in his hands to a meeting with Richard Nixon. When Richard Nixon read the letter, later on, he invited John to the Oval Office for a chat. Pictures from this encounter at the White House are part of John’s favorite memorabilia today.

John Kasich graduated from school and worked at the Ohio Senate in the employ of a Republican Senator. He worked as an aide during the senator’s term, and by the time he turned 26, John ran for office as a state senator. John beat the incumbent hands down and occupied the seat for a term. John Kasich continued his run by going for the seat of 12th Congressional District in the 1982 U.S. House of Representatives elections. This time, he was just 30 years old, and he again beat the incumbent Democratic Party seat holder.

John held the congressional seat for the 18 years to 2001. He was a member of the Armed Services Committee and here, he put his focus on spending patterns and details. John was overseas a couple of times on congressional visits to Bosnia, Russia, and Kuwait among other nations during his tenure.

John Kasich blazed the trail in 1993 when he teamed up with the Democratic Party Rep, Tim Penny to present an alternative budget. His effort was a narrow miss at the House as his presentation almost made the mark. John became the head of the House Budget Committee as Chair after the Reds took over House in the 1994 midterm elections. He remained at the helm till he opted out of the House in the year 2000.

Among his many highs was the headship of the 1995 Welfare Reform Bill committee as well as steering the 1007 balanced budget deal.

John Kasich hit the New York Times Bestseller List in the year 1998 with his book, “Courage is Contagious.” In April of the same year, he was named as one of the Newsweek’s entrees for "100 People for the 21st Century". John's thrust in his book was on the actions taken by ordinary citizens to impact their daily lives as well as those around them.
His other book is “Stand for Something: The Battle for America's Soul in 2006 and Every Other Monday: Twenty Years of Life, Lunch, Faith and Friendship” which was published in the year 2010.

John Kasich's first run for the White House through the primaries of his party was in 1999.John, however, threw his support behind George W. Bush. This was when he opted to leave Congress and not tow the path of Ted Kennedy, John McCain or Joe Biden who spent more decades as lawmakers. John Kasich pursued a business career along with media interests while moving back to the state of Ohio. John relocated with his wife and took along his twin daughters. He went gubernatorial in 2010 and defeated Ted Strickland, who was the incumbent. John was sworn in by 2011 and in January. He was keeping to his eight-time winning streak pattern in the congressional elections when he triumphed here to emerge as the Ohio State Governor.

John Kasich threw his hat in the ring for the 2016 primaries of the Republicans for the White House race. He was far off from being the fore focus in the race although he won his Ohio state primaries. He made it to the count of the last three remaining candidates in the fight before pulling out in May 2016. Knowing John and his tenacity, many reviewers, pointed to the fact that he was preserving his gunpowder for a future race. John Kasich ended the 2016 run as one of the last three and still has a chance to pull out the stops in the coming years.

John Kasich expressed his desires to look forward to something else he will accomplish when he was asked what was next on his radar. The rolling years will be the viewed carefully to see what he will do next.

John Kasich's first marriage ran from 1975 to the year 1980. He was married to Mary Lee Griffith, but the union produced no children. He eventually got married to Karen Waldbillig, with whom he had two daughters.