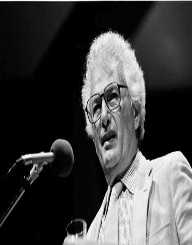 Joseph Heller was born on 1st of May 1923, in the Coney Island district of Brooklyn, New York. His parents were Isaac and Lena Heller, Jewish immigrants from Russia who arrived in 1913. His father Isaac was agnostic, and worked multiple jobs to support the family. Heller had half sisters Sylvia and Eli, whose mother had died in Russia. His father died following a botched operation in 1929, Heller was six. As Lena never learned to speak fluent English, the family struggled financially.

Heller began schooling at Coney Island's Public School No. 188, later Joseph Heller studied in Abraham Lincoln High School, graduating in 1941. Heller would spend the next year working multiple jobs until he joined the U. S. Army Air Corps. In 1944, Heller was placed in 488th Bombardment Squadron, 340th Bomb Group, 12th Air Force, and was sent to the Italian Front, flying sixty combat missions as a B-25 bombardier. After his retirement from the army, Heller studied English at the University of Southern California and NYU, funded by the G.I. Bill.

In 1949, Heller received Masters. in English from Columbia University, and spent a year as a Fulbright scholar in St Catherine's College in the University of Oxford in England. Heller published his first short story in 1948, in The Atlantic Monthly and two more in Esquire. Heller worked in managerial advertising job at Look magazine in 1956 and moved to McCall's in 1958. Heller met Mary Higgins Clark while working as a copywriter.

Catch-22 was published in 1961 by Simon and Schuster, it had mixed review in America, but was number one on the bestseller lists. Catch-22 caught the imaginations of people who identified with the novel's anti-war sentiment. The movie rights and the royalties made Joseph Heller a millionaire.

Heller continued publishing seven novels, one short story, three plays and screenplays each, and two autobiographies. Heller was teaching part time in Yale and University of Pennsylvania after Catch- 22. Heller returned to teaching at City College of New York from 1971 to 1975, while still maintaining his writing ritual.

Joseph Heller married Shirley Held in 1945, they had two children, Erica Jill and Theodore Michael together. They separated in 1981, with divorce finalizing three years after.

In December 1981, Heller suffered from Guillain-Barré syndrome, the road to his recovery was slow. Heller was admitted to the Intensive Care Unit of Mount Sinai Medical Hospital, and it was a month later that he could transfer to the Rusk Institute of Rehabilitation Medicine. Heller wrote about his ordeal in No Laughing Matter. He wrote it with help from friend, Speed Vogel. Joseph married one of his nurses: Valerie Humphries in 1987.

Heller died on 12th December 1999 of a heart attack at his home in East Hampton, on Long Island. Heller had just finished his final novel, Portrait of an Artist, as an Old Man.