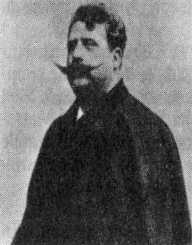 Ruggero Leoncavallo was born 23rd April 1857, to Vincenzo Leoncavallo, and Virginia D’Auria. He was born in Naples, Italy. His father was a judge, and as a young boy, he moved to Montalto Uffugo, a town in Calabria, with his father.

As he grew a bit older, he returned to Napes where he studied at San Pietro a Majella Conservatory, and then went on to study at the University of Bologna. He studied literature under Giosue Carducci, a famous Italian poet at the time.

In 1879, at the request of his uncle, Leoncavallo visited Cairo to showcase his ability on the piano. His uncle worked as the Director of the Press Department at the Foreign Ministry in Egypt.

Ruggero Leoncavallo began work as a piano teacher and pianist until revolts broke out in 1882 both in Alexandria and Cairo. Leoncavallo fled to France and found a place to live in Montmartre, Paris.

He found work as an accompanist for artists who performed in Sunday concerts. Ruggero Leoncavallo also began writing a symphonic poem called La Nuit de Mai. The piece debuted in 1887, to critical acclaim. With the success of his first masterpiece and with the money he had saved over time, Ruggero Leoncavallo returned to Milan where he became a composer of opera.

He worked as a teacher for some years, while he wrote his opera on the side. It wasn’t until 1892 that his opera, Pagliacci, was performed. The opera was a runaway success.

Ruggero Leoncavallo then went on to produce several productions that didn’t have much success. In 1906, he enlisted singers and musicians to perform his music in an extensive tour of the US. The tour was a success, but not overly so.

Ruggero Leoncavallo had gained acceptance as one of the foremost opera composers of his time. He wrote approximately 11 operas, including Pagliacci (1892), La Boheme (1897), Zaza (1900), and Zingari (1912). He also wrote nine operettas and two songs.

Leoncavallo’s most famous work was Pagliacci. The opera is number 20 on the Opera-base list of most-performed operas worldwide.

Ruggero Leoncavallo met Berthe Rambaud whilst living in Montmartre, and they married in 1895.

In 2002, the Ruggero Leoncavallo Museum was established in Brissago. It honors Leoncavallo and has personal items and original manuscripts on show.