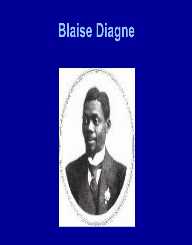 Blaise Diagne was born on October 13th in 1872. His place of birth was in Goree Island situated in Senegal in Africa. His Serer father, Niokhor Diagne worked as a cook. On the other hand, his mother worked as a servant. Later, young Diagne was adopted and baptized hence acquiring a new name Blaise. This marked the Christian name that he adopted from then on. He went for his early education at the Brother of Ploemel School. After performing well in his early education, he enrolled with Aix-en-Provence where he took his secondary education.

In 1891, took the French Customs Service exam which he passed thereby landing himself a job as a customs agent in 1892. He initially went to work in Dahomey before later working in other areas such as French Congo, Madagascar, French Guiana and Reunion.

Blaise Diagne ventured into politics after returning to his homeland in Senegal. In 1914, he immediately emerged the winner of one of the seats in the French National Assembly. During this time, he had outshined his opponent named Francois Carpot. His impact in office was profound as he proposed for full French citizenship in 1916 for four communities (Four Communes) at the coast. During the same year, he took over as the General Governor that would oversee the recruitment of troops in West Africa. Part of his main duties under this position was to guarantee reasonable working environment for French soldiers.

Soon, he founded the Republican Socialist Party in 1919. His strong party took over control of Four Communes. After a few months, he launched his newspaper dubbed La Democratie. Later on, his paper was renamed to L'Quest Africain Francais.

The following year, Blaise Diagne was appointed to serve as Dakar’s mayor. Politically, the Four Communes regarded him as their head. He served in this post for over a decade and ended his term in 1934. In 1931, he had been called to serve as Deputy Minister of the Colonies. He remained in this position until 1934 when he passed away.

Blaise Diagne had a son named Raoul. His son was famous for being the first black individual in France to play professional soccer.

Blaise Diagne passed away on May 11th,1934. He had been suffering from tuberculosis which contributed to his early death at the age of 61.