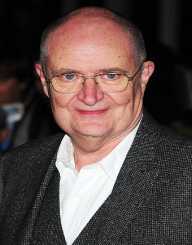 Well known for his remarkable acting performance in the Kate Winslet starrer Iris, Jim Broadbent is a talented actor. You may also know him as Professor Slug horn in the Harry Potter series of movies. Broadbent is an Academy Award-winning actor who has appeared in films like Moulin Rouge, Bridget Jones’ Diary, Cloud Atlas, The Chronicles of Narnia and Hot Fuzz.

Jim Broadbent was born on May 24, 1949, in Lincolnshire, England. He studied at the London Academy of Music and Dramatic Art in 1972.

Jim Broadbent did not land movie roles straight away. Instead, he went for stage acting. His collaboration with Mike Leigh proved very fruitful for his career. In 1979, he appeared in the play Ecstasy. He was hugely successful in moving the audience. Two years later, he appeared in Goosepimples.

Although Jim Broadbent's film career started in 1978, he didn’t get notable roles early on. He landed a minor role in the film The Shout.  A year ago, he had also tried his hands at a TV miniseries, titled, Illuminatus.

Broadbent liked the concept of TV films and appeared in several of those. Mike Leigh or Terry Gilliam directed most of them. In 1982, he featured in the TV film Birth of a Nation. Terry Gilliam cast him in Time Bandits and Brazil.

Jim Broadbent also worked with Anthony Hopkins in the 1987 film, The Good Father.

Broadbent then turned his attention towards the main screen and moved to Hollywood.  His start wasn’t very spectacular when he appeared in the movie Superman IV: The Quest for Peace.

In 1990 though, Jim Broadbent got the lead role in the movie Life is Sweet. Broadbent’s performance was widely praised, and movie offers started to pour in. His next project was Enchanted April that came out in 1992. He followed this with the film The Crying Game.

In 1994, Jim Broadbent took a detour from music again, this time towards theatre. He took part in a stage play by Woody Allen, titled, Bullets over Broadway. He followed this success with another play titled Little Voice in 1998.

In 2002, Broadbent appeared alongside Leonard Di Caprio in the famous movie Gangs of New York.

Broadbent’s most recent role is as Archmaester Marwyn in the critically acclaimed series, Game of Thrones. His performance is widely praised showing he still has that Broadbent magic left in him.

Despite so many achievements and such a long career, Jim Broadbent's most famous role remains to be from the movie Iris.

Jim Broadbent has been the recipient of many awards and honors in his career. He won the BAFTA award for his role in Moulin Rouge. In 1999, he was also awarded the Topsy Turvys London Film Critics’ Circle Award. Another one of his achievements is the Golden Globe he won for his role in Iris.

Jim Broadbent married Anastasia Lewis in 1987. They have no children.