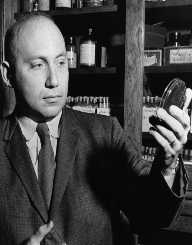 Joshua Lederberg was born on May 23, 1925. He was an American geneticist. He won the 1958 Nobel Prize in Medicine. He loved research work from a very young age, and this led to his love of genetic science. He is the one who established that E-coli bacteria could also reproduce sexually. He mostly researched on bacterial genetics. He died on February 2, 2008.

Joshua Lederberg was born on May 23, 1925, in Montclair, New Jersey, United States of America. He was born to Zwi Lederberg who was a Rabbi and Esther nee Goldenbaum. He was brought up alongside two brothers. His family moved to New York City when he was six months old. They settled in Washington Heights where he attended Public School 46 and later at Junior High School 164.

In 1941, Joshua Lederberg graduated from Stuyvesant High School. He was influenced by works of scientists such as Bernard Jaffe in researching cytochemistry. He received a scholarship and enrolled at the University of Columbia. He studied zoology as his major. He also received lab space that enabled him to work on cytophysiology of mitosis in plants and the uses of genetic analysis in cell biology.

In 1943, Joshua Lederberg joined the clinical pathology laboratory at St. Albans Naval Hospital. He joined the hospital as part of his military service. In 1944, he graduated from the University of California with a Bachelor’s Degree. He later joined the Columbia College of Physicians and Surgeons and continued conducting his experiment.

Joshua Lederberg started working on the genetics of bacteria at Columbia University. His work impressed Francis Ryan who later recommended him to Edward L. Tatum. Edward invited Joshua to join him in his laboratory at the University of Yale. Edward was also working on bacteria. In 1946, Joshua Lederberg took a year leave at Columbia University and joined Edward. They researched intensely on the Escherichia coli bacterium and established that the bacterium entered a sexual phase during which it was able to share genetic information through bacterial conjugation. They published their findings in a paper ‘Gene Recombination in Escherichia coli.’

Joshua Lederberg did not return to Columbia University. Instead, he earned his Ph.D. from the University of Yale in 1948. In 1947, he was appointed as an Assistant Professor of Genetics at the University of Wisconsin. Three years later he was appointed Associate professor and became a full professor in 1954. In 1952, he made the discovery that revealed the second process of gene exchange between bacteria. The discovery he made in collaboration with his graduate student Norton D. Zinder. They published their discovery in a paper titled ‘Genetic Exchange in Salmonella.’ In 1956, in collaboration with Laurence Morse and Esther Lederberg, Joshua discovered specialized transduction. He then came up with the technique of bacterial replica plating. In 1957, he became the chairman of the Department of Medical Genetics at the University of Wisconsin.

In 1959, Joshua Lederberg left the University to establish the Department of Genetics at the Stanford University School of Medicine where he became chairman. In 1962, he was appointed as director of the Kennedy Laboratories for Molecular Medicine. He collaborated with Australian virologist Frank Macfarlane Burnet to study viral antibodies. He also assisted in developing Dendral which is a pioneer project in artificial intelligence. This he did with Edward Feigenbaum, Bruce Buchanan, and Carl Djerassi. In 1978, he left Stanford to become the President of Rockefeller University, a post that he held until 1990 when he stepped down. He became the Professor Emeritus of Molecular Genetics and Informatics at the University.

In 1956, Joshua Lederberg received the Pasteur Medal with Esther Lederberg for their outstanding contributions to the fields of microbiology and genetics by the Society of Illinois Bacteriologists. In 1958, he received the Nobel Prize in Physiology and Medicine for his discoveries concerning genetic recombination and the organization of the genetic material of bacteria.

In 1946, Joshua Lederberg married scientist Esther Miriam Zimmer, but they divorced in 1966 due to personal competition in the field of science. In 1968, he married psychiatrist Marguerite Stein Kirsch with whom he had a daughter, Anne Lederberg. He also adopted his wife’s son David Kirsch. He died on February 2, 2008, in New York.