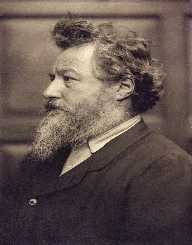 One of the most influential literary figures of the 19th Century, William Morris is considered instrumental in developing the fantasy fiction genre of the modern period. He was a prolific writer and an artist whose works have influenced greats like J.R.R. Tolkien.

William Morris was born on March 24, 1834, in Walthamstow, London, England. He was the third child of William and Emma Morris. His elder siblings died in infancy. He also had a younger sister named Isabella.

William Morris was a child prodigy with a keen interest in the English language. He had devoured many novels by the age of four. When his father died in late 1947, he was left with a lot of wealth and had no economic problems in receiving the best education possible.

As with most prodigies, William Morris wasn’t interested in the academic learning. He first went to the Marlborough College but was removed later due to his lack of interest in the school’s curriculum. Instead, he focused on learning architecture, and poetry.

William Morris did not begin writing fantasy early on in his career. He made paintings, then ran an architecture firm, and wrote non-fiction.

In 1891, he released his first work of fiction, The Story of the Glittering Pain.

Due to his interest in architecture, William Morris began his career as an intern at the office of the George Edmund Street. In 1861, he built an organization with other artists, Morris, Marshall, Faulkner and Co. and they worked on carvings, interior designs, stained glass work, tapestries, etc.

William Morris was hired to decorate a green dining room at the South Kensington Museum in 1867. By this time, he had lost interest in painting and begun focusing on architectural works. He also started writing.

William Morris started by writing poetry and non-fiction works. In 1876, he wrote a 10,000 line poem The Story of Sigurd the Volsung and the Fall of Niblungs. Although not as widely read as his other works, this poem was critically well received by the likes of George Bernard Shaw.

William Morris became increasingly inclined towards socialism and wrote extensively on the topic. Some of his major works include Art and Socialism and A Summary of Principles of Socialism.

In 1891, William Morris wrote his first fantasy novel The Story of the Glittering Pain. This was a highly influential work and is counted among one of the best he ever produced. In 1896, he published Wood Beyond the World. At the time of his death, he was preparing the final draft of The Sundering Flood. His other notable writings include News from Nowhere and TheWell at World’s Ends.

Apart from writing, painting, and architecture, William Morris also co-founded the Society for the Protection of Ancient Buildings.

William Morris died on October 3, 1896. He was 62 years of age. He died a highly popular literary figure.

William Morris married his love Jane Burden in 1857. However, Burden did not love him back. She had an affair with his friend Dante Rossetti, though, the couple never separated. They had two daughters from the marriage – Jane Alice and Mary.