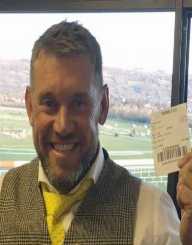 Lee Westwood the Peter McEvoy Trophy in 1990, the British Youth Championships in 1993 after which he turned professional and by 1997 he was winning tournaments and became one of the top earners on the professional golf circuit.

As a professional golfer Lee Westwood went on to have over 40 wins and in 2015 he was in the final 50 leaders on the Final Official Golf Ranking. He was also among the first 12 players in the 2016 Masters Tournament. He was also a member of Europe’s Ryder Cup team and one of the top scorers. As well as success, Lee Westwood also experienced a number of frustrating losses. Over the course of his career, he has won tournaments in Asia, Africa, Australia, North America and Europe.

Lee Westwood dislodged Tiger Woods as the world’s number one golfer in 2010 and retained the ranking for twenty-two weeks. He was awarded an Order of the British Empire in 2011.

He married Laurae Coltart in 1999 and the could have two children.