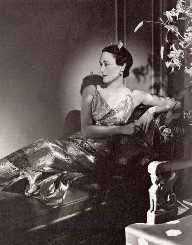 The Duchess of Windsor, Wallis Simpson was born Bessie-Wallis Warfield on the 19 June 1896 in Blue Ridge Summit, Pennsylvania t Alice Montague Warfield, and Teackle Wallis Warfield. Her father of tuberculosis when she was an infant. There was little money after the death of her father and Simpson’s private education was paid for by a wealthy uncle, her father’s brother. Her mother meanwhile, ran a boarding house in Baltimore.

She was a pupil at Oldfields Girls School in Maryland.

She met her first husband, Earl Winfield Spencer in 1916 and they were married the same year, living on Pensacola naval base as her husband was a naval lieutenant and pilot. During her marriage, she lived in Asia for two years, and in 1926, she petitioned for a divorce. In 1927 Wallis Simpson met Ernest Simpson, and in July 1928, they got married. She then moved to London, and through her friendship with Viscountess Furness, she met the Prince of Wales.

While still married to Ernest Simpson, Wallis Simpson conducted an affair with the Prince of Wales which continued until the death of King George V on the 20 January 1936. Before the coronation of the new king, the British Prime Minister Stanley Baldwin had to discuss the Simpson affair with the heir apparent. When informed that the Prince of Wales intended marrying Simpson once her divorce from Ernest Simpson was finalized, a constitutional crisis broke out which resulted in the abdication of the Prince of Wales on the 11 December 1936.  The couple married on the 3 June 1937 without any of the royal family attending the wedding. From the time of her marriage, Wallis Simpson became known as the Duchess of Windsor, without the title of Her Royal Highness (HRH).

When World War II broke out in 1939, the couple were living in France but later relocated to Lisbon, Portugal before, for security reasons, they were sent to the Bahamas. From 1 August 1940, the Duke of Windsor was the Governor of the Bahamas and remained there until 1945 when they returned to Paris, France.  The couple spent the remainder of their lives in France.

The Duke of Windsor died of throat cancer in 1972. Wallis Simpson continued living in their home in France until her death in 1986.