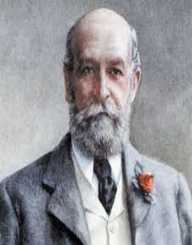 George Cadbury was born in Birmingham, England on September 19, 1839. His parents were John and Candia Cadbury.  John Cadbury was a tea and coffee merchant, and Candia was a member of the Temperance Society

George Cadbury's family belonged to the Society of Friends, also known as Quakers. He was educated at the local Quaker school.

When John Cadbury Sr retired in April 1861, and George Cadbury and his brother Richard took over the company. The business was not in good financial shape at the time and the brothers set about improving the company.

By the late 1870s, the company was prospering, and new premises were found on the outskirts of Birmingham. They called the factory Bournville, after a stream that ran through the property.

Socially conscious, the company built houses for its workers, and the complex became known as Bournville Village. They also provided social, recreational and sporting facilities as well as health services.

George Cadbury's was taken over by Kraft in 2010 for an eleven billion English pounds.

John Cadbury had been selling cocoa and drinking chocolate before his sons took over the business. Then in the 1890s, Cadbury started experimenting with making milk chocolate, and Cadbury’s Dairy Milk was produced in 1897.

George Cadbury was concerned with the working conditions of their staff, and when the company moved their business to the outskirts of Birmingham in 1879 in what was then Worcestershire, he started a social security programme which included good housing, medical and sporting facilities for their staff. He also organised pension plans for Cadbury workers.

He became Chairman of George Cadbury after his older brother Richard died in 1899 and died at his home, Northfield Manor on the 24 October 1922. Northfield Manor was subject to arson in 2016 and later had to be demolished.