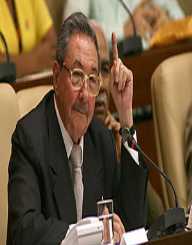 Raul is also First Secretary of the Central Committee of the Communist Party of Cuba and the Commander in Chief of the Armed Forces and has been since 2011. While his beginnings were far humbler, Raúl Castro had been the Minister of the Armed Forces for nearly 50 years before his promotion.

Raúl Castro was born in Birán, Cuba, on June 3, 1931. Ángel Castro, his father, was a Spanish (some say Galician) immigrant, and Lina Ruz, his mother, was a Cuban. Together, his parents had seven children. Raúl was the youngest of the three brothers. Also, there were five half-siblings. The Castro boys were considered unruly and were expelled from school. It is unknown whether or not Raúl finished his education before proceeding to college.

Raul was considered an unexceptional student who majored in social sciences. His brother, Fidel excelled in his studies. It seemed Raúl would often be in his brother’s shadow. While still in college, Raúl joined the Socialist Youth. It was related to the Partido Socialista Popular (PSP) or Cuban Communist Party. The difference was its focus on Soviet-style communism. As a result, he took part in protests, some of which were violent.

In 1953, Raúl Castro helped Fidel in his attempt overthrow Cuban leader, Batista. The coup failed, and the brothers were imprisoned for nearly two years. After being pardoned, they left for Mexico. Once there, they created a more organized resistance with 80 other leaders who were exiled. They focused on guerrilla-style tactics. The Cuban Air Force detected Their attack force of 82.

Just 16 men survived the assault, but Raúl proved himself to be a useful military leader to his brother, Fidel. Their next tactic was to kidnap two Canadian and thirty-four American tourists in June of 1958. The results were in their favor: Batista declared a cease-fire. They captured Havana on January 8, 1959.

Once the revolution was over, Raúl Castro settled into a second-in-command position to Fidel for nearly 50 years. He held several titles along the way, including First Vice President of the Cuban Council of State, the Council of Ministers, and the National Assembly of People’s Power. He was a member of the Central Committee of the Communist Party of Cuba. He was also Second Secretary of that organization’s Politburo.

In 1972, Raúl Castro was designated First Deputy Prime Minister of Cuba. At that time, he spent extra time to learn more about economic policy. This would have an impact on Cuba after the fall of the USSR in 1991. When this happened, Cuba stopped receiving subsidies. Raúl implemented changes to economic policy, based on what he had learned.

In 2006, Fidel Castro suffered from gastrointestinal bleeding and was rushed into surgery. Carlos Valenciaga, Fidel’s secretary, announced that Raúl would temporarily assume the leadership of Cuba at that time. The following year, Raúl Castro was named an acting head of the Council of Ministers, Council of State, and the Communist Party of Cuba.

In 2008, Fidel officially resigned, and on February 24, the National Assembly chose Raúl as the next president. In 2011, there were more changes. Raúl created a plan with 300 economic reforms for Cuba. He stated they would reduce state spending, boost foreign investment, create privatization, and place term limits on the president’s office.

Raúl Castro married Vilma Espin on January 26, 1959. She was an MIT chemical engineering student and the daughter of a prominent lawyer in Cuba. They have three children: Deborah, Mariela, and Nilsa. Vilma passed away in 2007.