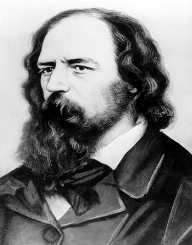 One of the most acclaimed poets in English literature, Alfred Tennyson was the deserving successor of the likes of Wordsworth, Byron, and Keats. The heritage of the Romantic Movement created by these stalwarts of English literature was pursued by Tennyson very elegantly and with utmost refinement. The Victorian era poet is regarded as one of the greatest Poets of England.

Alfred Lord Tennyson was born on August 6, 1809, in Somersby, Lincolnshire, England. He was the third of the eleven surviving children of his father George Clayton Tennyson and his wife, Elizabeth Fytche. Among his ten siblings, two were his elder brothers and four younger ones besides four younger sisters.

Tennyson’s father, a man with many virtues and exceptional capabilities, was a country clergyman and employed as a Rector of Somersby (1807-31), Benniworth (1802–1831) and Bag Enderby. He also occupied the position of Vicar of Grimsby (1815). He earned an adequate income for a clergyman and managed the expenses of such a large family wisely. However, apart from the financial stability, there were other factors which went against the well-being of Tennyson’s family.

Alfred Tennyson’s father was a sulking man as he was disinherited in favor of his younger brother by his father who was also responsible for making George a clergyman against his wishes. Resentfully, George Tennyson took to alcohol and drugs and often abused his wife and children by physically threatening them.

All the three elder Tennyson brothers including Alfred took to writing poetry during their teens. The collection of the poems penned by the three brothers was published when Alfred was only seventeen.

Alfred Tennyson studied at King Edward VI Grammar School, a boarding school located in Louth, Lincolnshire from 1816 to 1820. He was brought back to be home tutored during the year 1820 after his father started experiencing recurrent mental breakdowns due to his overindulgence in alcohol. Later, Alfred went on to attend Scaitcliffe School and Englefield Green School.

In 1827, Alfred Tennyson enrolled at Trinity College, Cambridge, where his two elder brothers were already studying. Joining Trinity college was a relief for him as it was a mode of withdrawing from the anxious environment of his home.

Alfred Tennyson’s first publication is the poetry book titled ‘Poems by Two Brothers’, where all the three brothers had their contribution to poems. It was published in 1827. In 1829, he won the Chancellor's Gold Medal at Cambridge for his poem ‘Timbuctoo.’ Winning the coveted prize at such a young age was a stupendous achievement for Tennyson.

Alfred Tennyson's first solo collection of poems titled ‘Poems Chiefly Lyrical’ was published in 1830. The collection included two of his greatly admired poems ‘Claribel’ and ‘Mariana’. Unfortunately, Tennyson had to leave Cambridge without collecting his degree in 1831 due to the death of his father. He returned to his father’s place, the Rectory, where they were allowed to stay for the next six months and shared the responsibility of supporting his widowed mother and the immediate family.

Alfred Tennyson's second collection of poetry was published in 1833. The collection contained one of his most celebrated poems ‘The Lady of Shalott.’ Regrettably, the book received some extremely unfavorable reviews. Tennyson was much affected by these criticisms and altogether stopped publishing any poem for almost a decade, although he continued to write due to the support and advice of his close friends.

His closest pal Arthur Hallam died while on a trip to Venice in 1833. The death had a profound impact on Tennyson sweeping him off towards a creative impulse, accounting for the creation of poems like ‘In the Valley of Cauteretz,’ ‘In Memoriam A.H.H,’ ‘Way of the Soul,’ ‘Ulysses,’ ‘Tiresias,’ ‘Oh! That were possible,’ ‘Morte d'Arthur,’ ‘Tithonus’ and many more.

In 1842 finally, Alfred Tennyson published a two-volume collection of his poems. It was aptly titled as ‘Poems.’ The first volume contained the lyrics which were already released but the second volume comprised of mostly new poems. The audience with great enthusiasm received the volume and immediately found success. In the same year, Tennyson almost lost all his money which was invested in an unsuccessful wood-carving venture. He could recover some of his lost money in 1845 due to an insurance policy taken out by a friend for him.

In 1847, Tennyson came out with a long narrative poem ‘The Princess’ with modest success. However, the pinnacle of his literary career arrived in 1850 with the publication of his magnum opus poem ‘In Memoriam A.H.H,’ which was dedicated to his friend Arthur Hallam. In the same year, he was appointed Poet Laureate by Queen Victoria succeeding William Wordsworth. He held the position till his death in 1892, the longest tenure of any Laureate before or since.

In 1836, Alfred Tennyson became romantically involved with Emily Sellwood, sister-in-law of his brother Charles. They were engaged too. However, Tennyson broke the engagement partly due to the financial instability he was facing and partly due to the history of epilepsy in the Tennyson family. Later, Tennyson found out that he did not have epilepsy and also found himself in a more secure financial position.

Alfred Tennyson resumed his contact with Emily Sellwood after that, and finally, the couple got married in June 1850. They were blessed with three sons. Unfortunately, one among them died in infancy. Out of his two surviving sons, Lionel Tennyson, his youngest son, contracted jungle fever while on a visit to India and predeceased his parents. The eldest son, Hallam Tennyson, named after his very dear departed friend went on to become the 2nd Baron Tennyson and penned 'Tennyson: a Memoir.’

In his later years, Alfred Tennyson was suffering from Gout. His condition worsened during the late summer of 1892. He breathed his last on October 6, 1892, at the age of 83 at his Aldworth home in Surrey. His mortal remains were interred in Westminster Abbey's Poets' Corner.