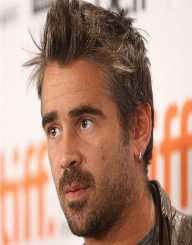 The Irish actor Colin Farrel was born on the 31st of May 1976 in Castleknock, Dublin, Republic of Ireland. He has three siblings, older brother Eamon Jr. and his two sisters, Claudine and Catherine. His parents are Rita and Eamon Farrell. His father played football and ran a health food shop. It was assumed that Collin would follow in his father’s athletic footsteps. The contrary became apparent when he became interested in acting after an emotional response to Henry Thomas’s performance in E.T the Extra-Terrestrial. He was then encouraged by his older brother to attend The Gaiety School of acting.

While he schooled in Gormanston College in Count Meath, he unsuccessfully auditioned for Boyzone, an Irish Musical group.

Collin Farrell soon dropped out of the school of acting after he was discovered and cast in a BBC television show Ballykissangel in 1998. He made his film debut in The War Zone (1999) directed by Tim Roth. He appeared in some other television series and independent films until he got his big break in the Tigerland Movie in 2000. His road to stardom came with several successions of movies.

Colin’s first starring roles came in psychological thriller Phone Booth in 2002. It was closely followed by the spy thriller film The Recruit alongside his movie hero Al Pacino. He has also appeared in other successful movies like SWAT (2003); he played a villain in superhero film Dare Devil (2003); he starred in Intermission (2003) and Alexander (2004); he appeared in Miami Vice (2006). He had developed growing popularity in Hollywood among writers and directors. His role in In Bruges (2008) snagged him his first Golden Globe Award.

As at 2015 he began his role as Detective Ray Velcoro in HBO crime series True Detective. His most recent movies are romantic science fiction thriller The Lobster (2015) and fantasy movie, Fantastic Beasts and Where to Find Them (2016).

Collin Farrell along with other celebrities was the spokesman for Special Olympics World Games in Shanghai, China.

In 2012, the actor whose older brother was openly gay was a part of the anti-bullying campaign organized by the Irish LGBT youth organization BeLonG To. It was called, Stand Up!

He is also an official Ambassador for the Homeless World Cup.

As a young celebrity, Collin Farrell led a very riotous life. He had a reputation for being a bit of a Casanova and was nicknamed Lothario. In 2003 he was named by People’s Magazine as one of the fifty most beautiful people and the 6th world sexiest man.

On the relationship angle, he was rumored to have been married to English Actress, Amelia Warner but he debunked those rumors. He dated British Writer Emma Forest for a year. He also had relationships with singer Britney Spears and actresses Angelina Jolie and Demi Moore amongst several others.

He had his first son James Padraig Farrell in 2003 by American model Kim Bordenave. His second son Henry Tadeusz Farrell came by Alicja Curus who he co-starred with on 2009 romantic drama movie Ondine.

Collin Farrell was notorious for his drinking sprees, womanizing and use of prescription and recreational drugs. He had a meltdown and was checked into rehab in December 2005. He returned to the movie scene after his break seems to have changed gears but without losing his appeal.

He has traded his more flamboyant lifestyle for simple pleasures of Yoga and Saunas. His first son James Farrell has a rare genetic disorder he was born with, called Angelman syndrome. It is said to cause difficulty with speech and some motor fictions as well as make him prone to seizures. Collin Farrell now spends his time as a hands-on parent caring for his children and being a typical annoying dad.

He has confessed to being a bit of a romantic. He also writes terrible poetry. The Hollywood celebrity is very much Irish. He had never allowed himself to be altered to suit any bogus publicity oriented image. He spends his time in between Los Angeles and home in Dublin.

Colin Farrell had his share in Hollywood stalking experiences. He was stalked in 2006 by telephone sex worker, Dessarae Bradford. He successfully obtained a restraining order against her. She also made threats of lawsuits aimed at extorting him. None of the attempts stuck due to lack of evidence.

In the same year, the Irish actor filed a lawsuit against his former girlfriend, Playboy Model, Nicole Narain. He alleged that she attempted to distribute a thirteen-minute sex tape they had made in 2003. She intended to make money off it and damage his career.

The most significant controversy of Collin Farrell’s career was his meltdown due to abuse of recreational and prescription drugs. He was heavily criticised during this period, and it threatened his career. He, however, made a triumphant return from this.

Collin Farrell has featured, starred in more than forty movies and television shows many of which were critical and commercial successes. He has received several nominations and awards for his acting.

His first Golden Globe Awards came in 2009 for Best Performance by an Actor in a Motion Picture Comedy or Musical for his role in In Bruges. Collin Farrell was again nominated in 2017 for his role in The Lobster.